The Birding Cup results are in!

The Birding Cup, Shaver’s Creek’s annual fund-raising tournament was this past weekend. From Friday, April 30, at 7:00 p.m., through Saturday, May 1, at 7:00 p.m., 18 teams of over 80 birders competed to identify the most number of bird species in a twenty-four-hour period in the central Pennsylvania region.

For the third year in a row, the “Wing Nuts” won the overall Birding Cup, this year with 130 species seen. Shaver’s Creek’s own “Bad Optics” and “Red-rumped Irruptives” took top honors in the County Cup with 122 species and the Birding Boot with 97 species, respectively. The “Turnstones” saw 106 species to win this year’s Potter Mug for most species seen by a team with at least 50% birders with less than 2 yrs. experience. The total number of bird species seen by all teams tallied 168!   Our goal for this year’s Birding Cup is to raise $12,000. We are well on our way there, but pledges can still be made per identified bird species or as a flat donation. Donors can also choose to support a specific team’s results, or the total species seen by all teams. For more information on the Cup, you can visit our website at: http://www.outreach.psu.edu/shaverscreek/index-birding-cup.html To donate now, visit: http://giveto.psu.edu/, then choose “Give now online”. On step 2, choose “Shaver’s Creek” from the drop down menu, and under “Additional Information” enter “Birding Cup” and any specific team you might like to support. This is important as there will be a team award for most money raised. If you would like to support a specific team, here is a list of all teams and their results for this year’s Cup:

Sparrow Hawks – 52 species
Thanks to all of our Birding Cup teams, and to all of you who have pledged your support! 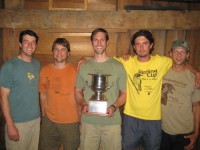 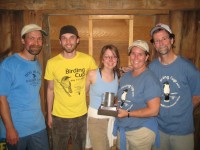 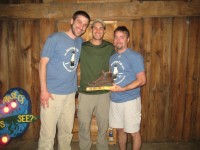 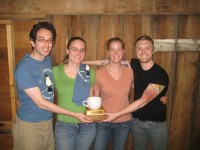