From learning about plants and trees to engaging turtles, snakes, and raptors — people of all ages need to closely observe to learn.

The Litzinger Discovery Room at Shaver’s Creek has plenty for the whole family to explore — a place for fun and learning about nature! It’s also home for our resident reptiles and amphibians.

The Litzinger Herpetarium, generously supported by Drs. Thomas and Mary Ellen Litzinger, is the centerpiece of the original Discovery Room. It melds the 1930s-era lodge charm (this room was likely a cafeteria in the original Forestry Lodge) with modern day animal care. Featuring exhibits designed by Clyde Peeling’s Reptiland, the custom-made area provides unprecedented support for our reptiles and amphibians — and the young professionals in our animal care team who work with them every day.

New interactive exhibits cycle through the Discovery Room on a yearly basis — many of which are created by students enrolled in the SEED Semester. Current favorites include a light-up constellation “cave,” an array of archaeological finds from the region, and a game where kids can try to “catch” fireflies! 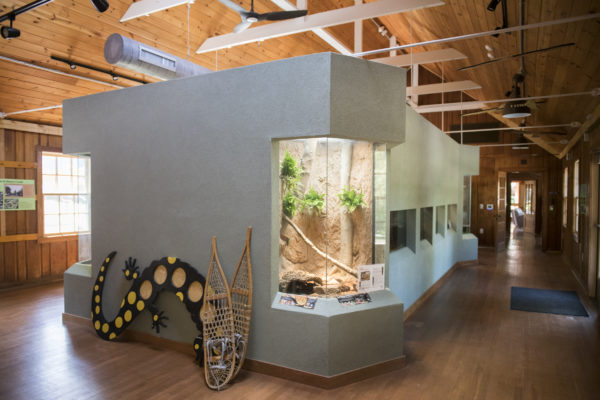 The middle Discovery Room (the former entrance and bookstore of the original building) is a hideaway of fun that the little ones can’t resist, featuring different habitats that families are encouraged to go out and explore outside. Kids can wear fun animal costumes and peruse our large collection of children’s books. You’ll also find our “Touch and Feel Table,” a permanent display that invites you to discover various natural objects. Painted birds of prey suspended from the ceiling provide perfect practice for your bird identification!

During Kids Corner season, visit the Discovery Room to find a self-guided series of activities for children from the week’s Kids Corner program.

Shaver’s Creek has a variety of native reptiles and amphibians that reside in the Discovery Room. It’s the perfect place to get a close-up look at a snake, turtle, frog, or toad. You can explore at your own pace or meet our animal ambassadors in a guided program. 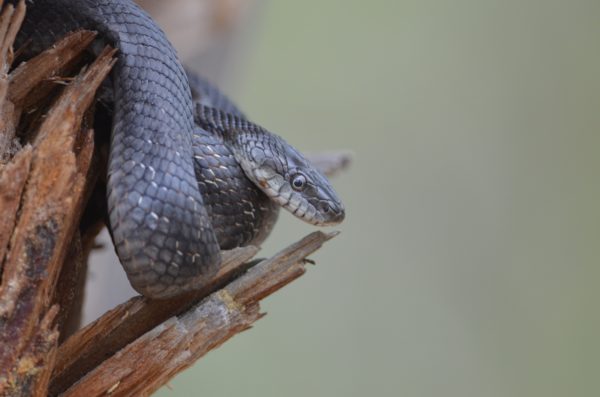 This arboreal species is well adapted to locating prey in a variety of settings: in trees, meadows, farmlands, and under debris. This allows Eastern Ratsnakes to serve an important role in the ecosystem by maintaining rodent populations and thereby limiting tick populations that may carry Lyme Disease. 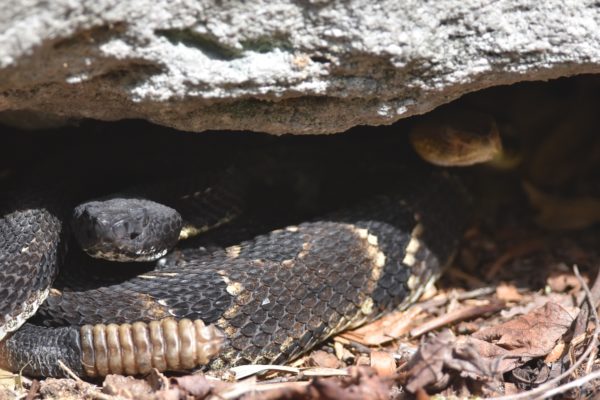 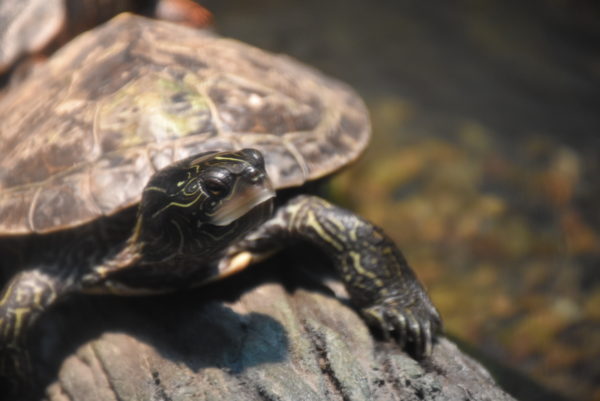 Map Turtles are generally located in larger bodies of water. A shy species, when more than one Map turtle is basking, these turtles will orient themselves to ensure each direction can be seen by a turtle. When one turtle dives for safety, all follow suit. 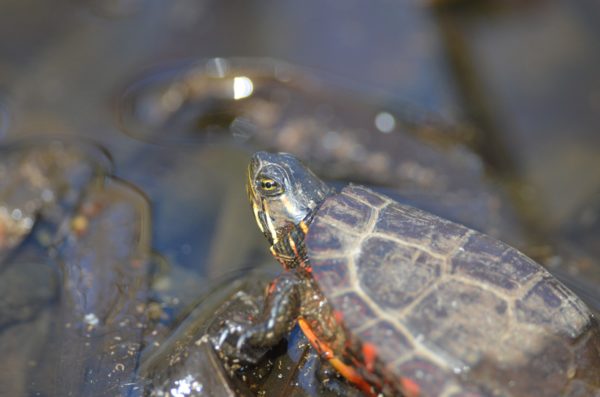 Eastern Painted Turtles are some of the most abundant turtles in North America – owed to their ability to opportunistically feed in any habitat. Depending on habitat and food availability, Painted Turtles may be primarily herbivorous or carnivorous. 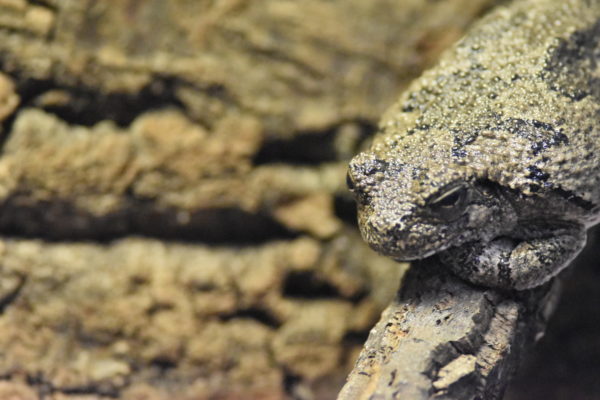 Eastern Gray Treefrogs can change their color from gray to green to match their background. This species depends on vernal pools and fishless wetlands to breed in and for larval development. Excellent climbers, adults prey on a variety of invertebrates. 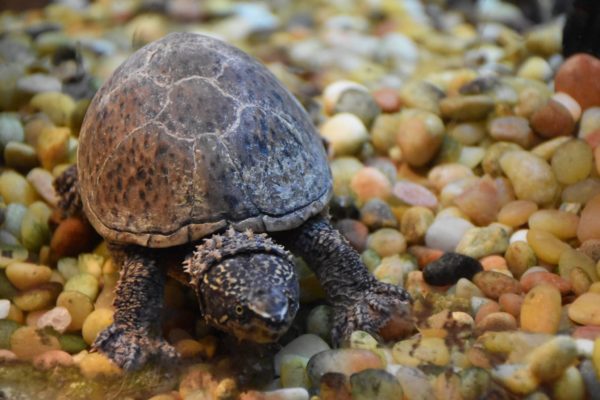 Eastern Musk Turtles, also known as Stinkpots, are often mistaken for juvenile Snapping Turtles. Like Snapping Turtles, they have a small plastron (bottom shell), long neck, and bite as a main defense. However, they lack the long, strongly keeled carapace (top shell) found on Snapping turtles. They can release a foul smelling liquid as a defensive, the origin of the name Stinkpot. These turtles inhabit slow-moving aquatic habitats. Unlike most aquatic turtles, Musk Turtles rarely choose to bask out of water – their time spent in the water often results in an algae layer on the shell. 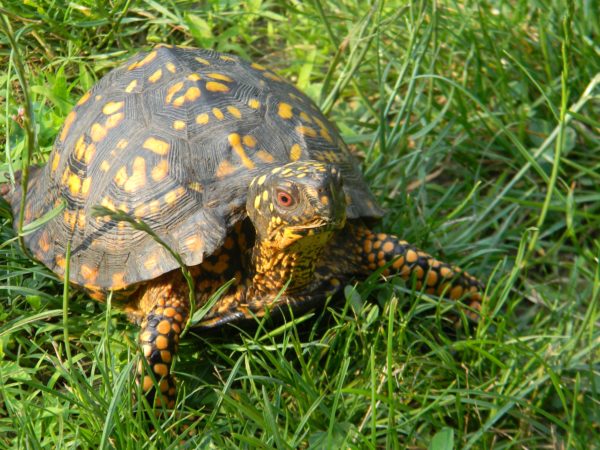 Box Turtles are the only truly terrestrial turtle species in the Northeast, and are named for the hinge system that allows these turtles to tightly close the bottom of their shell. Look for this species in deciduous woodlands and fields, especially after heavy rainfall. 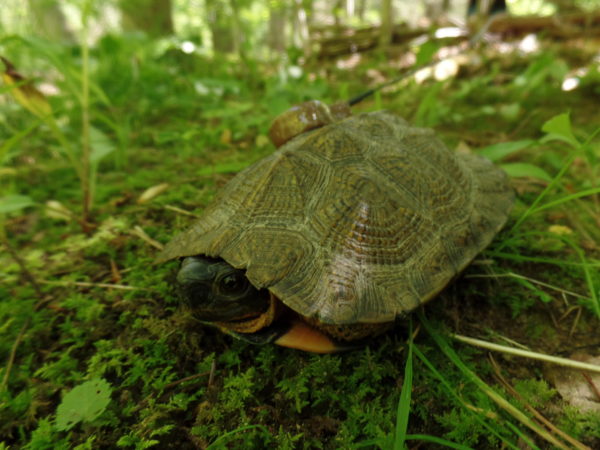 This semi-aquatic species is most often noticed during its time spent on land — usually in the late spring-summer, while Wood Turtles are predominantly aquatic during colder seasons. Graduate student Carli Dinsmore has been researching Wood Turtles at Shaver’s Creek. 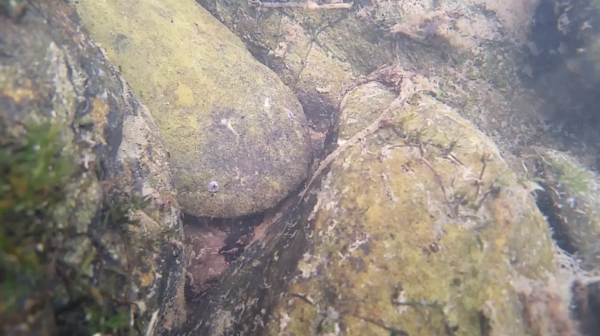 The third largest species of salamander in the world (9-16”), Eastern Hellbenders inhabit cold, fast-flowing rivers and streams with gravel or sandy bottoms and large rocks. A flat body, white toes, and skin flaps make this an unmistakable species in Pennsylvania. 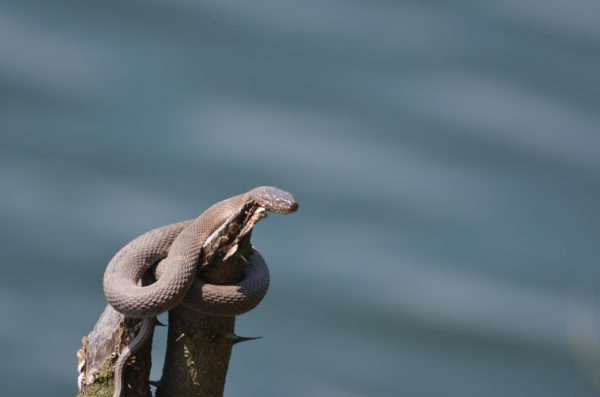 As the name implies, this species is usually found within or around aquatic habitats feeding on fish and frogs. As one of the most commonly found species, Water Snakes are often mistaken to be Copperheads. To distinguish, Copperheads possess a triangular-shaped head and narrow neck, whereas Watersnakes’ heads blend more into the neck.

To learn how differentiate Watersnakes from Copperheads and Milksnakes, see this PDF. 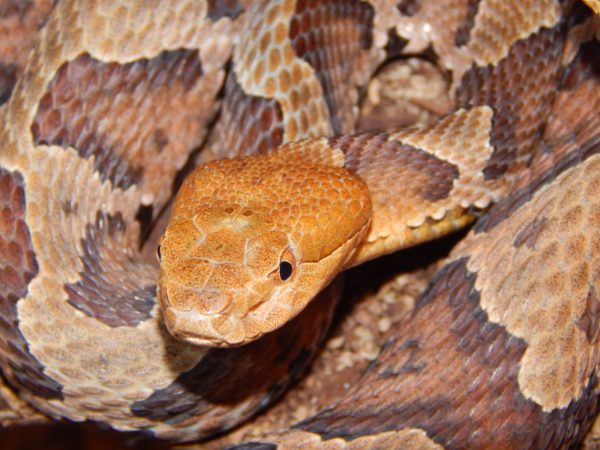 Copperheads are one of three venomous snake species in Pennsylvania (along with the Timber Rattlesnake and Eastern Massasauga). Often mistaken for Northern Watersnakes and Eastern Milksnakes, Copperheads can be distinguished by an hourglass-shaped saddle pattern along the back, a triangular head to hold venom sacs, and slitted pupils. Shaver’s Creek has one Copperhead on the ambassador team.

To learn how differentiate Copperheads from non-venomous species, see this PDF.