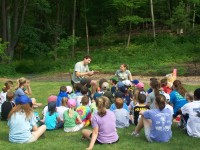 This Tuesday marked the start of 2010’s first week of the Discovery and Explorer camps at Shaver’s Creek! This summer, the Discovery Campers (aged 6-8) will be focusing on learning about insects, while the Explorer campers (aged 9-11) will be learning about amphibians. During the Discovery and Explorer camps, campers are given the opportunity to learn about nature through games, stories, songs, and exploration. Other camps offered at Shaver’s Creek this summer include Wee Wonderers (for the 3-5 age group), Rock n River (an adventure camp that includes activities such as canoeing, caving, and rock climbing), Watershed Wonders, (a camp focusing on watershed exploration) and Raptor Camp (where campers get to work with our birds of prey).

So far, the first week of summer camp has been a success, and the summer camp staff is looking forward to making this summer the best one yet!

Pictured above: Palomino talking to the Discovery campers in morning circle on the first day of camp.