It is Saw-whet owl migration season! On Friday October 30th a few Shaver’s Creek folks assisted the Ned Smith Center for Nature and Art research team at one of their owl banding stations. During the autumn season many of these tiny owls travel down from their breeding grounds in Canada and northern United States to warmer climates for the winter. Many banding stations are set up at this time in order to learn more about these owls. Saw-whet owls do not get larger then 4.0 oz, but do not be fooled; these owls have sharp talons and beaks allowing them to catch and eat small animals. We banded two owls on Friday night, recording their physical measurements, as well as approximate age and sex. The age is determined based on the pattern of molting shown by the primary and secondary flight feathers. A black light shined on an extended wing will show bright pink new feathers and dim older feathers. We also caught two previously banded owls whose records can be used to shed light on migration patterns and age. Once the owls are banded they are released and the information can be used to learn more about these wonderful night-time creatures! 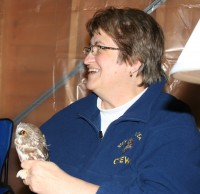