We are all buoyed by the beautiful spring weather here at Shaver’s Creek. The last few days we have been hearing the sweet woodland song of the Brown Creeper, joined around the center by the songs of Chickadees, Titmice, Juncos and our resident Carolina Wrens. Today we were greeted with our First of the Year (FOY) Eastern Phoebe vocalizing in the Raptor Center trees.

In other bird news here, Steve Kolbe (the official counter for this year’s Tussey Mountain Spring Hawkwatch) reported this morning that he saw a Ross’s Goose with four Tundra Swans in the small pond of water at the dam-end of the mostly-dry Lake Perez. The Swans and Ross’s Goose were observed taking flight later in the morning, and subsequent visitors have been unable to relocate them. These photos show the relative size of the Ross’s Goose to the much larger swans, in flight and on the Lake. Also near the Lake Perez dam were a pair of Red-tailed Hawks circling, a Belted Kingfisher rattling, a singing Eastern Bluebird (pictured) and another Eastern Phoebe. Happy (almost) spring and good birding! 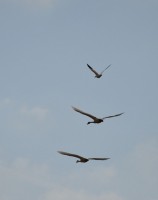