“If I were an insect in winter…” 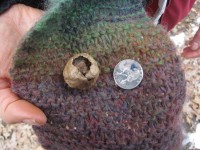 Some form of parasitic insect injected an irritant into the stem or leaf of a local plant that reacted by forming a gall, a ball-like structure within which the insect eggs or larvae will live throughout winter.  We found this gall on a weekend hike in State College, with itty-bitty larvae tucked inside.  It is most likely an oak apple gall holding the frozen? larvae of a wasp.

A walk through the winter woods… might be cold.  It might be snowy and hard to see.  The wind might blow with such gusto, at a sub degree temperature, that your nose turns into a mucous-stiffened rock, making it difficult to breathe.  Or, for a slightly less gloomy outlook on the weather, consider this:  at least you can enjoy the woods without insects buzzing around your ears and biting your ankles.

But does this mean insects aren’t around?  Not at all!  Just because we can’t always see them in the colder months doesn’t mean every insect in our world has died or disappeared forever.  When you think about it, insects must have a survival strategy because, come spring, there’s always a new batch of ‘em.

A Spectrum of Reactions to the Cold

Almost like possessing superhero powers, insects have adapted to outlast the cold in amazing ways. Generally, smaller insects and/or those with less water in their bodies have an advantage since water expands as it freezes, creating internal crystals that can prove fatal.  Some insects with water mass use cryoprotectant anti-freeze compounds like ethylene glycol to lower the freezing point of their bodily fluids and so resist freezing, or at least, control the freezing of fluids around their cells so that they can slow their metabolic function.

Incredibly, other insects may undergo “torpor” by freezing at night and thawing during the day, a process that researchers seek to better understand for possible application for the storage and regeneration of human tissue.

Adult insects may also go months without eating.  A Mourning Cloak butterfly will take a “hibernation” break called diapause, hiding its resting body behind loose tree bark or within a tree cavity until more mild temperatures coax it from this slumber.

In the best or worst of times, there are adult insects that stay active during winter, such as springtails and stoneflies.  Sometimes referred to as “snow fleas,” springtails live in the surface of the soil and congregate in the warm microclimate of sunny patches.  A spring-like appendage attached to the rear of their body propels the springtails forward in a hopping motion reminiscent of the way fleas move, to explain their (technically incorrect) nickname.

The opposite of many of their insect peers, Winter Stoneflies are active during winter and enter diapause during summer.  Nymphs shed their skins to become adults in late winter, who then lay eggs and die shortly thereafter.  The eggs hatch into a new batch of nymphs that will feed for a short period of time before entering their hibernation state, lasting from mid-spring till the fall.  Presumably by feeding this time of year, the stonefly has less competition from other insects and fewer predators to worry about.

Some insect life cycles involve the death of the adult before winter even begins.  However, like any parent, these insects leave behind progeny in various forms that emerge in spring to breed and sustain the population.

For example, praying mantids lay eggs in a frothy mass called an ootheca that hardens and protects the eggs through winter.  The eggs hatch into nymphs as the weather improves.

Larvae, like wooly bear caterpillars, bury under leaf litter and other organic matter so that they can form pupal cocoons in spring and emerge as adult Isabella Tiger Moths.

Other moths and some butterflies, such as Black Swallowtails, will sometimes spin a cocoon or chrysalid in the pupal stage before winter and stay wrapped up on leaves, logs, and branches until spring initiates their metamorphosis into adults.

Wonky temperatures (like 60 degree weather in February!) may disrupt insect dormancy, causing insects at various stages of their life cycle to emerge prematurely.  Alternatively, very, verrry long stretches of freezing days can lead to abnormal insect mortality, as is the case with some grasshoppers.

Fair-weather friends, like Painted Lady and Monarch butterflies, migrate south to warmer climates in late summer and return north to herald the coming of spring the following year.  Though they don’t tough it out through the ice and snow, Monarch butterflies face the significant challenge of migrating all the way to Mexico in search of warmth, a journey that naturalists estimate takes one to three months.

So, far from dead, the insect world is much like ours in winter – waiting for warmer months by bundling up or resting in some form of shelter.  Whether you’re adventurous like a stonefly and decide to venture out into the cold, or instead stay inside, wrapped up in a thick blanket like a swallowtail in its chrysalid, you’ve developed a way to deal with winter, and insects have done the same.

Where Do Insects Go in Winter?