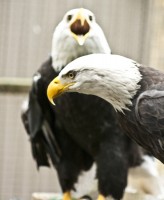 The skunk cabbage is blooming, the sap is flowing, and young bird fancies are turning to thoughts of love—especially if the young bird in question is a bald eagle. Bald eagles start nesting in late February and early March, and the bald eagles here at Shaver’s Creek are no exception.

We have three bald eagles here at Shaver’s Creek: a juvenile male who lives by himself and an older male and female who share an enclosure. It is the older pair whose story unfolds every spring. Our female bird came to us in 1989 after sustaining a wing injury due to be being shot. As a result she had to have her left wing amputated and was unable to return to the wild. She spent a short time at a facility in Delaware participating in a breeding program; however, she was unsuccessful and moved to Shaver’s Creek. Our older male came a few years later, in 1992, as a juvenile. He was found in South Carolina with an infected wing injury from being shot. Due to the extent of the injury, his right wing had to be partially amputated. He was put into the enclosure with the female bald eagle, and they have been nesting ever since.

It is important to note that Shaver’s Creek is not licensed to breed raptors, but due to the disabilities of our bald eagles, the eggs they lay are not viable. However, their nesting instinct is still alive and well. Around this time every spring we place sticks inside the bald eagle enclosure for them to build a nest with. The eagles carry the sticks around and lace them together to create a nest, usually on the ground in the back corner of the enclosure. Eagles in the wild build huge nests perched on top of a tree, on the ground, or on a cliff edge, usually near water. They are typically five feet in diameter, but can be as large as nine feet across. Eagles can also add on to a previous year’s nest, which can result in nests weighing up to two tons.

In the wild, eagles lay two to three eggs and incubate them for 35 days. While the eagles at Shaver’s Creek don’t lay viable eggs, we let them go through this spring ritual every year because it is how they would behave in the wild. We let them sit on the egg for about a month so that the female won’t continue laying eggs, which can sap her strength. If you come to Shaver’s Creek in the next month you can get a glimpse of this seasonal bald eagle ritual unfolding in our Raptor Center.

If you are interested in learning more about eagles come out on Friday March, 9th at 6 pm to learn about our other species of eagle, the Golden Eagle. Please call ahead to register; there is also a suggested five dollar donation for non members. Thanks to our members for making programs like this possible.