Raptors of the Renaissance: Who is the fairest of them all?

Imagine spending some time away from class to mingle amidst a Renaissance Faire reenactment, to witness and participate in authentic activities like weaving a maypole; jousting with sticks and swords; playing human chess and checkers; bartering for tarts, cheese, and gingerbread; buying and selling colorful wares; telling fortunes; and letting arrows fly towards an archer’s bulls-eye. 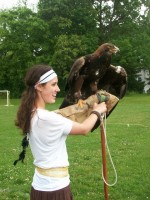 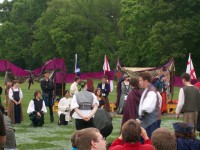 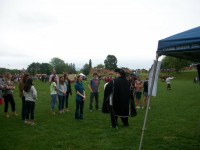 With bagpipe song and trumpet bugles rolling periodically across what is ordinarily a grassy athletic field, the otherwise damp, gray day pulsed with creative energy, theatrical fantasy, and accented conversation.

The raptors of Shaver’s Creek added a touch of magic themselves, on this day posing as proud and fierce hunters adept at the graceful art of falconry. Riding the hand of their “falconer” (Shaver’s Creek staff and volunteers) as they parted a path through the sea of high school students, the Red-Tailed Hawk, the female Red-Shouldered Hawk, the American Kestrel, and the male Barred Owl elicited cries such as “Is it alive?” and “Ooh, I want to touch it!” The noble birds occasionally responded, clicking or screeching or whistling their varied calls. Once an appropriate space bubble had been established, students listened to and asked questions about the birds’ historical roles in relation to falconry. (Owls are not typically falconry birds, but we brought the Barred Owl along to compare and contrast various bird adaptations that determine which birds are best for training.) The Golden Eagle also made some dramatic appearances, perched atop a wooden staff and scanning the crowd with keen eyes.

The sport of training birds to assist with hunting dates back to 680 B.C. in China, or possibly earlier, in Egypt. Falcons, hawks, and eagles fit into different classes of falconry: the “long-wings,” “short-wings,” and “broad-wings.” Depending on the size, gender, and type of raptor, a bird reflected the social status of its owner within society. For example, in medieval Britain and later, when falconry became something of a fad (anytime between 800 to 1600 A.D.), these birds were used:
Social rank and appropriate bird.

To own a bird outside of one’s rank was punishable by fine, dismemberment, or sometimes even death.

Hunting parties facilitated alliances between kingdoms and families of stature.  Falconry birds were considered valuable, meaningful gifts and royal figures kept several birds at once, oftentimes cared for by hired expert falconers who primed them for hunting. 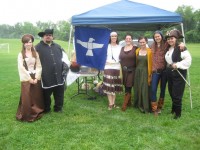 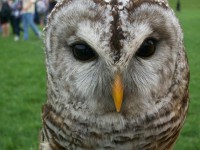 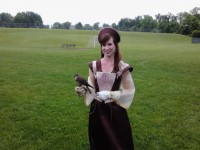 With the advent of firearms in the 1700’s, falconry lost popularity, but the sport has grown more recently following a renewed interest in the 1920’s.  The basics are the same:  to develop trust and rapport with a bird, a falconer must obtain the bird young and prove that he/she will provide good hunting opportunities and substantial reward for a successful hunt; otherwise, the bird will consider the falconer a hindrance rather than a partner and will flee at the first opportunity.

Birds are kept at a carefully-controlled weight to maximize their hunting ability, and with proper care, a falconer can ensure a lasting relationship with his/her bird for ten to twenty years, and sometimes even longer.

Modern-day falconry sustains the appeal of the sport because the sight of a diving falcon, a careening hawk, or a soaring eagle is a timeless and awe-inspiring spectacle to behold.
Many thanks to SCAHS for allowing Shaver’s Creek to join in the festivities! The day just flew by!
For more information about the history of falconry, visit: http://www.iaf.org/index.php?option=com_content&view=article&id=43&Itemid=27
For more information about becoming a falconer, visit: http://falconry.com/ 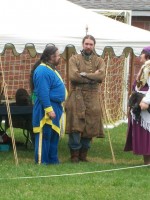 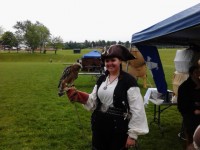 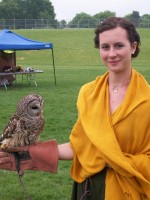 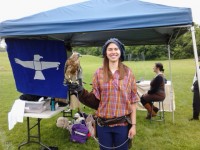