Winter is here, and along with the snow comes animal tracks. I love following tracks in freshly fallen snow.  There is always a chance you might follow the tracks to their source. Animal tracks can be found year round, but the snow makes them easy to see. In other seasons, I might follow animal tracks through the mud and then lose them in leaf litter on the forest floor, but after a snowfall, I can follow the tracks wherever they may go. I get wrapped up in the mysteries of an animal’s tracks and enjoy an adventure—and so can you! 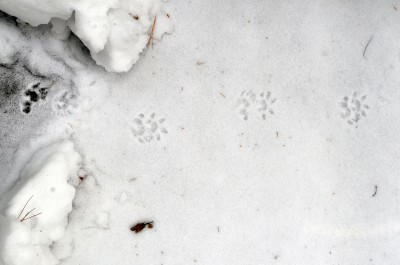 We don’t often get a good sense of how many animals may be in a given area since many are nocturnal and most shy away from humans. Walking out in the morning after a fresh snow, everything seems so quiet and calm, as if all the animals were sleeping through the winter. But I can tell that there had been many animals moving around Shaver’s Creek—rabbit, squirrel, bird, and cat tracks surround the Environmental Center. With the aid of snow, you can follow in the footsteps of animals you may never get to see. Secretive, nocturnal animals leave evidence of their existence in the snow.

Following animal tracks is like reading part of the story of an animal’s life. You can almost picture the animal moving as you follow its footsteps. You may get a hint of the thoughts running through the animal’s mind while trying to unravel the mysteries of the tracks. Why did it stop here? Why did it start running? What was it eating? Where is it heading, and why? There are always more questions and new stories to unravel. 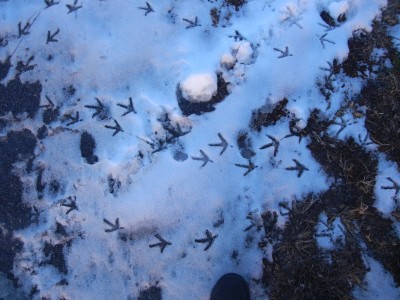 The snow also creates shelter for small animals, such as mice. Their tunnels and chambers under the snow create an underground world where the temperature is warmer and a roof of snow keeps them out of sight. You may see bumps formed by underground tunnels or hear scratching noises without seeing anything. These mice, and other warm-blooded animals, are still going about their daily activities, and they too have left their signs and tracks in the snow.

If you are new to tracking, Shaver’s Creek is a great place to get started! When we reopen to visitors on February 12, 2014, drop in and check out the educational exhibits on animal tracks in our Discovery Room, or peruse our library of naturalist books in the Lower Classroom. But you don’t have to know anything about tracking to start unraveling the mystery. In fact, you can start looking for tracks in your own yard! So put on your warm layers and begin an adventure by following animal tracks. There are always new stories to discover in the snow. 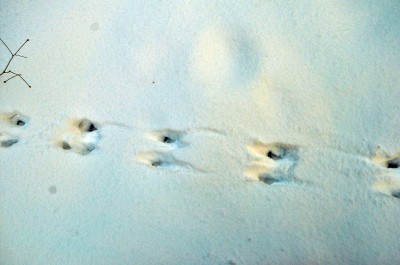