What lovely days we are having outside! After seemingly never-ending snow this winter, we finally get full days of warmth under the sunshine.

Of course, we are not the only ones who have some trouble dealing with the cold weather. While we stay warm indoors and enjoy the service of heating systems and insulation thanks to modern technology, I wonder how animals handle zero-degree temperatures during the winter.

Opossums are one of those animals that inspire my curiosity. 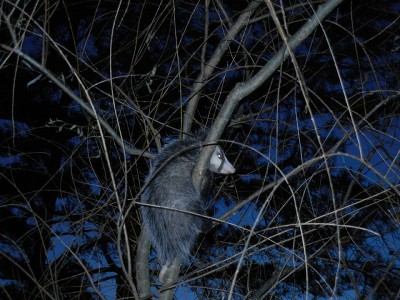 Opossums are so poorly suited for cold weather that many of them lose tips of their ears and tails to frostbite even as they stay in a den over winter. Their fur is not as thick as many other mammals!

Ouch, that’s painful to even think about.

Many people don’t really like opossums. They are often perceived as big rats with a full mouth of teeth—fifty, to be accurate, which is pretty impressive for their body size. Opossums have more teeth than any other mammal in North America, according to the Pennsylvania Game Commission!

Yes, they may have a bit of a “scary look,” but they are much more than that.

As the only marsupials in North America, opossums are more closely related to kangaroos and koalas found in Australia than they are to rats commonly seen in North America, which is pretty awesome when you think about it! Like other marsupials, they carry their babies in an external pouch after they are born. The pouch is necessary because marsupials are born before they are well developed, so they continue their growth under the protection of their mother’s abdomen.

Despite their looks, they may actually be one of the most harmless animals in the wild! When facing threats, the most common way they choose to defend themselves is by simply hissing and drooling. Basically, they are just trying to look tough.

If hissing and drooling doesn’t work, opossums may then use one of their most well-known talents: “playing dead.” They roll over, become stiff, close their eyes (or stare off into space) and bare their teeth as saliva foams around the mouth and a foul-smelling fluid is secreted from their glands. Pretending to be dead can actually help them escape from their predators—after all, no predator would be very interested in something that is motionless and smells. While this seems to be a smart move, the truth is, they are not really acting consciously; they are actually fainting from shock, which could last anywhere from under a minute to as long as six hours.

People also dislike opossums because it is said that many of them are carriers of rabies. Wow, that would definitely be something to be scared of—however, that isn’t true at all! Their low body temperature (between 94 and 97 degrees Fahrenheit, low compared to most mammals) actually makes it really rare for any virus, including rabies, to infect them. In fact, rabies is more commonly found in cats, dogs, and squirrels, yet we adore them all. 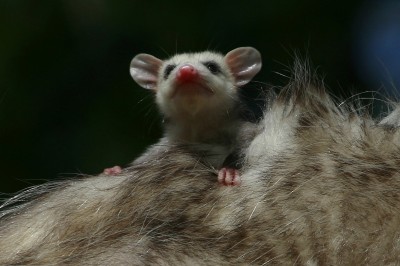 Another impressive thing about opossums are their prehensile tails. Their tails could almost be considered a “fifth hand” since they can use their tails to carry objects or to hang on tree limbs for short periods of time. Opossums are excellent climbers, and hangers! 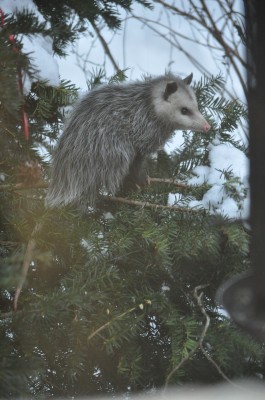 So, next time you see opossums in your yard, instead of shying away or trying to get rid of them, try taking a closer look (through binoculars is a great idea!) and appreciate them.

Just like us, they are looking forward to the time when the cold is over.