You are curled up on your deck, overlooking a field soaked in summer twilight. Winking between foliage you see them; insect beacons, shamelessly waving their abdomens in the air for the entire world to see. They flicker and frolic through the air, traveling who knows where, with the dancing demeanor of a playful ballerina. Some of you may have wondered what those sparkling bundles of joy are… they are Fireflies—also known as Lightning Bugs—and to many people around the world, they carry with them the nostalgia of long warm nights.

These creatures have gathered an air of mystery through the centuries, and Filipinos in particular have a captivating legend explaining how the fireflies got their light:

A long time ago in the Philippines, Fireflies were just called “Flies,” and they would be seen flitting around beautiful trees that did not yet have a name. As the legend goes, these Flies were mesmerized by the trees, and would go to them as the light began to fade. Back then the Flies did not have fire in their bodies, and instead used the moon to guide them. One night, a famished tribe found the wonderful trees, climbed into the branches, and gorged themselves on the succulent round fruit so they would be re-energized and ready for the next day’s journey. The tribe was so grateful that they named the trees “Star Apples,” because they believed the fruit must have been a gift from the stars. The Flies heard this, and viewing themselves as guardians of the fruit, they wished upon the stars to become “Starflies,” with light from the stars in their bodies. The stars were touched by this, but they knew it would be impossible to give the Flies starlight. Instead, the stars gave the Flies fire to hold in their bodies. The next night as it began to get dark, the Fireflies were astonished to see that they now glowed as bright as the departing sun. They looked up the sky and thanked the stars for their gift.

There is something moving in the idea of Fireflies feeling guardianship over a tree species, and I love this legend for the link it creates between sky, plant, and animal. However, that interrelationship is still present in our world today. Fireflies are an integral parts of our ecosystem, and for those of you familiar with the food web, these insects are yet another tendril within the web of life. Without them, things will change and our connection with nature will weaken. 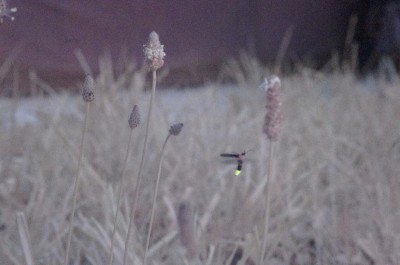 But how will we come to see Fireflies as more than just an aesthetic bonus to the evening landscape? How will we come to see them as a necessity? Well, I have found that the more I learn about an animal or plant, the more I tend to respect it. I have an incredibly irrational fear of sharks, yet find immense joy in studying them because the knowledge of their role in the ocean (and how awesome they are) smooths over my fear of their bite.

So, let me shed some light (wink wink) on the insect that sprinkles glitter over our June gardens. Fireflies are actually neither bug nor fly—they are beetles! Like Ladybugs, their beetle heritage is often skipped over. Beetles have been classified under the order Coleoptera, from the Greek words “koleos” sheath and “ptera” meaning wings. This is because Beetles have tough front wings that fold over their delicate hind wings, like a shield. They also have chewing mouth parts rather than sucking gadgets like a true bug, and they eat plant and animal matter rather than liquids. 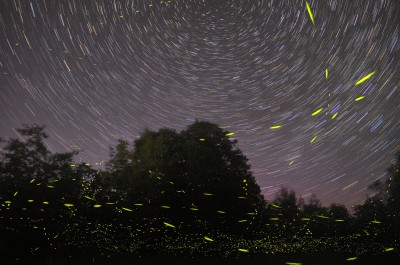 Firefly larvae actually glow in the dark, just like the adults! They are jewels in the night, and you may spot them right on the ground, nestled in a bed of moss. Not only do Firefly babies sparkle, but they also eat meat! Snails, slugs, and other soft bodied animals are their favorite meal, but incredibly, scientists are unsure about what adults Fireflies like to munch on.

Fireflies use their light up abdomens to communicate with each other about territories, predators, and about how attractive they are. In most species, both the male and female light up, however it is often the males that flash their light while the females scan their choices from trees, grasses and shrubs. When the female finds a male she likes, she responds with a flash of her own! 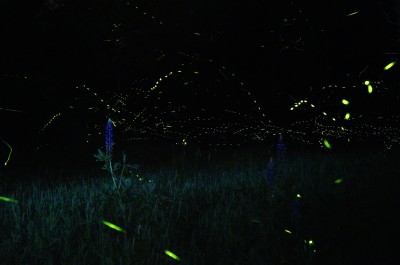 These are just a few Firefly info nuggets, and there is more information out there! If the fancy strikes you this summer, go outside and observe these insects of the night; you never know what you might discover. Watch for synchronized groups of Fireflies—rumor has it you may see Firefly flashes that occur all at once! And remember, Fireflies are a valuable member of our natural world, and their bright abdomens deserve a place to stay!

I wish I was a Firefly
A Fireflies’ never glum.
cus how can you be grumpy
When the sun shines out your bum!
~ Author unknown

With photos by Justin Raymond and Mike Lewinski (Creative Commons).