The fall season at Shaver’s Creek Environmental Center is building momentum. The fall season out here starts at about 500 MPH and continues so until the beginning of November, when the waves of programs and events begin to slow down. On Monday, September 15th the summer 2014 season review took place, marking the official close of the summer that was; meanwhile, the wheels were set in motion for programs and events for the summer of 2015. The next day, we had a bus full of K–3rd graders come rolling down Discovery Road, beaming with excitement for their Guided Nature Center Visit. During a GNCV, our team of environmental educators share information about Pennsylvania wildlife with the aid of our live animal friends. The excitement is palpable. September 16th also marked the official first day of our new Director of Live Animal Care, Jason Beale! (A more extensive update on Jason will come in the near future.)

Later that evening and the next, the Outdoor School (ODS) team was in full force, as directors, learning group leaders (LGLs), and counselors met on campus and then at Shaver’s Creek for two counselor training sessions.  Here, the counselors are introduced to the magic of Outdoor School, given a brief orientation on what a week at ODS is like, and learn the lessons that they will teach 5th grade students. This may indeed be the best Outdoor School season ever. 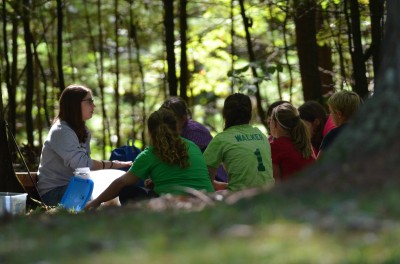 Thursday, September 18th was one of those beautiful fall days that make me thankful to live in Central Pennsylvania. It was a great day for interns and naturalists to participate in a day of Migratory bird watching out on Jacks Mountain. Birds observed include a few American Kestrels, Cooper’s Hawks, Sharp-shinned hawks, two Bald Eagles, one Osprey, and 50 Broad-winged Hawks. Around the Center that day, there was a noticeable calm in the area after a few weeks of intense programming. This too passed as a group of 7th and 8th graders from the NCCL School in New Jersey returned to the Center Thursday evening for a campfire and cookout after a week of adventure based learning. The next wave of school students, a group of K–6th graders, came out the morning of Friday, September 19th for a combined GNCV and forest walk. 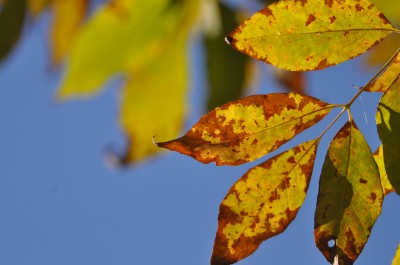 As I sit here in the afternoon of that day sharing this with you, the calm has returned. Birds and insects dominate the auditory landscape, and the afternoon sunlight is casting a golden tone over the center. Fall is a magical time. At Shaver’s Creek, it is part of our purpose to share this magic with people, in an effort to connect people to people and people to place. So wherever you are, take a moment or few to pause, and connect to the magic falling all around you.