On Saturday, November 8, Hawk Mountain hosted Golden Eagle Day. Shaver’s Creek staff has participated in this program for several years and invited current interns to attend for professional development. Jason Beale, program director of live animal care, and Jon Kauffman, raptor center assistant, facilitated three shows that focused on bird of prey adaptations and migration patterns. Although our Golden Eagle was the star of the show, the Peregrine Falcon and Red-Tailed Hawk inspired awe from the audience as well. 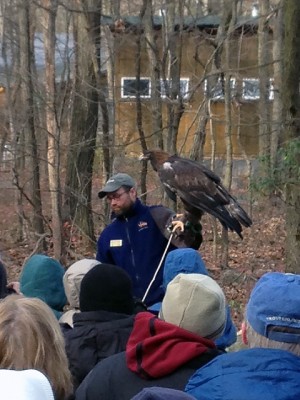 Hawk Mountain is located in Kempton, Pennsylvania, and is the world’s first refuge for birds of prey. Its mission is to conserve birds of prey through raptor conservation science and education. However, Hawk Mountain has not always been a place where raptors are conserved. In the 1920s and 30s, people would go to Hawk Mountain to shoot migrating birds for sport and sometimes to earn money. During the Great Depression, the PA Game Commission offered $5 per Goshawk that was shot. Unfortunately, these massive shootings led to the extinction of the Passenger Pigeon — a species taken for granted at the time — within 50 years. The shootings stopped when Rosalie Edge, a New York conservationist, leased 1,400 acres on Hawk Mountain and placed a warden on the property. In 1938, she purchased and deeded the property to Hawk Mountain Sanctuary association, which became a non-profit in Pennsylvania. 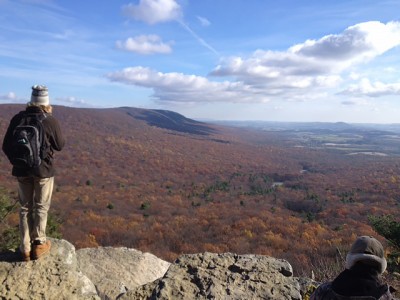 Today Hawk Mountain is a unique place where people come from all over to learn more about birds of prey. There are several trails open to the public that lead up to astounding vistas where migrating hawks can be seen along the ridgeline. Their visitor center has a beautiful exhibit that displays the migration routes of common raptors seen across the area. As an intern, it was a great experience to visit another nature center, meet their staff, and appreciate how their “place” is special to them. If you have not checked out Hawk Mountain, I highly suggest you do so in the near future! 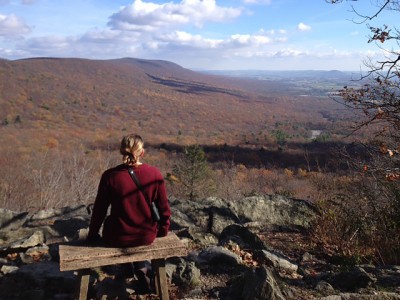