Owls in the Classroom

At 5:45 in the morning, Shaver’s Creek’s raptor center is a very different place than it is during daylight hours. Owls, as we so often say, are nocturnal. The owls at Shaver’s Creek are no exception, so when raptor center intern Emily Hurley and I entered the owl enclosures in preparation for an early morning program, there was quite a raucous party going down. Some owls were drinking from their bowls, others were hooting wildly, and some others were playfully jumping from perch to perch. After rounding up all our crazy owls, we embarked on a two hour drive to Millville Elementary school to present three owls to 500 school students.

Upon our arrival, the corridors and classrooms felt much like the owl enclosures had felt earlier that morning. Excitement was buzzing throughout the school. “The owl people are here!” we heard one student say. Others just stared at the three enormous sheet-covered owl crates that we were hauling into their auditorium. As the day continued, the program went much like other school programs. Most of the kids showed interest in the birds; many had questions, and even more had stories that somehow took the place of answering one of our questions. However, the real reward came during our presentation to the 4th grade class of Millville Elementary. Throughout the weeks prior to our arrival, the class had been reading a book called There’s an Owl in the Shower by Jean Craighead George. It’s about a poor rural town in California that is surrounded by old growth Redwood trees. There is a feud going in this town between the loggers and the environmentalists. The main character is the son of a logger, and the story documents his journey from wanting to shoot all of the protected Spotted Owls—which have left his father unemployed—to understanding how everything in the world depends on the forest (that his father was employed to cut down). 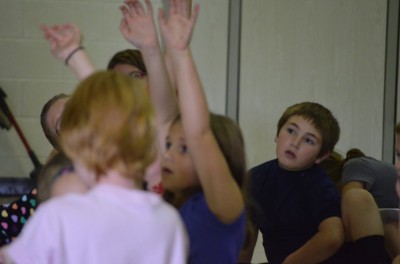 The 4th grade class in attendance—many of them wearing classic sports jerseys, camouflage, and superhero t-shirts—had apparently gone through a very similar transformation. Instead of listening quietly and telling a few stories, they had a whole slew of questions about the birds; they were raising their hands and spewing out incredibly specific facts that they knew from reading There’s an Owl in the Shower and scouring the library for tidbits. These students were no Sparknoters, I tell you that. The 4th grade class in front of us had Emily and I on our toes making sure we didn’t misrepresent any facts or slip up on some numbers. They were on their game and they were excited: excited about the owls, the forest, and what could be done to protect them.

Environmental education is a curious endeavor. These kids haven’t just learned about why protecting our environment is important, but they learned that they actually want to protect their environment. After the program, a parent approached us and thanked us with such sincerity for coming to present the birds. Her firetruck-obsessed son, after several years of firetruck-dinner-conversation, had begun to talk endlessly about owls. “How cool are owls?” he would say. “They fly around the forest completely silently and they can see in the dark!” Keep this in mind: all of this took place in an elementary school classroom with a few small windows looking out onto a mono-cropped corn field. Going out into nature to learn about the environment is the most fantastic way to learn. But we should never discount the power of a devoted elementary school teacher assigning her students a book by Jean Craighead George to change the course of an elementary school student’s life. 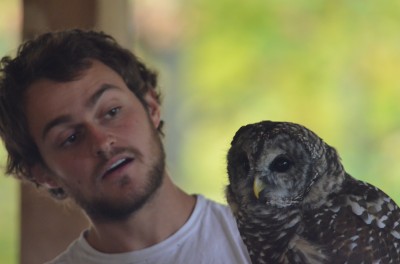