In Sand County Almanac, Aldo Leopold spoke of a bird that refuted this notion: “the utility of a game bird is to serve as a target, or to pose gracefully on a slice of toast.” Throughout his essay, Leopold’s prose makes it clear that witnessing the theatrics of the American woodcock (Scolopax minor) provided him with a profound reverence for these birds. He continued to pay them tribute every April by attending their courtship displays on his open farmland. After viewing the annual ballet I must admit I too have been captivated.

On an April night, as the sun dips away and light folds over, open fields that have been rid of their snowpack can be characterized by a unique sound: the “peeent” of a woodcock. Quite nasally and distinct, this sound announces the males as they prepare to demonstrate their worth to females down below. When ready, the courtiers leave the ground and begin spiraling 200-300 feet up in the air, often disappearing from sight into the quickly fading palette of sky. Upon reaching their peak, they zig zag down like a spastic feather or the helicopter seed of a maple, back and forth, returning near or to the same spot from which they took off. As they zoom through the darkening sky, a twittering can be heard as air passes through their primary feathers, an auditory phenomenon that never fails to stop me in my tracks. A unique series of liquid chirps often accompanies the elaborate bravura at the ground level, adding to the multi-sensory reward of a night in mesmerizing company. 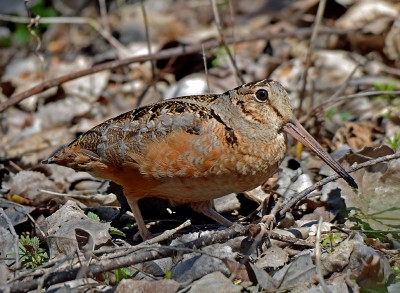 Also referred to as the timberdoodle, night partridge, bog sucker, and Labrador twister, woodcocks belong to the family Scolopacidae, which means that though they are primarily forest and field dwelling creatures, they are actually related to sandpipers. This family is characterized by long toes, typically long bills, and in all but one species, an elevated hind toe. Woodcocks conduct their impressive displays in open terrain which provides optimal viewing potential for their courtship behavior, a component that works out well for an interested audience. The appearance of the woodcock is dominated by their proportionally gigantic eyes near the back of their head, an ingenious positioning that offers convenience and foraging success. Woodcock are actually equipped with better binocular vision in the back of their head rather than in the front, an interesting counter to the supreme frontal vision of hawks and other predators: due to this placement, woodcock are able to keep tabs on predators that may be approaching them from above as they prod the soil for earthworms and other invertebrates such as snails, millipedes, spiders, flies, and ants. In addition, their eyes are situated far enough away from the ground that they avoid splattering from mud or other debris as the birds prod the earth. Talk about efficient dining!

Though woodcocks are laden with admirable adaptations, one of my favorite things about these birds is the strange, comical butt-bobbing that accompanies their foraging behavior. They will slowly place one foot forward at a time, moving their rump up and down, pausing in between steps with their head poised inquisitively towards the ground. This tactic actually serves a very clever purpose: by shifting their weight back and forth, or “rocking,” they prompt earthworms to move around beneath the soil, and as a result the attentive bird may locate its prey with greater ease. However, in watching this dietary innovation, one cannot help but grin at the surprising sassiness of the movement and I must admit that the first time I witnessed this behavior, I snorted with glee and scared the bird right off the ground. 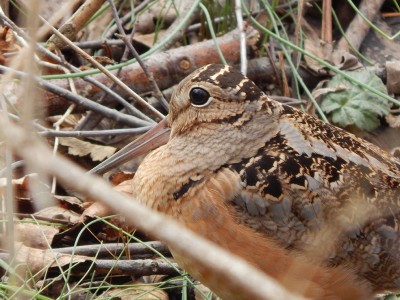 Migrating populations of the woodcock are short distance travelers, wintering in southern Florida and the regions near western Texas, while their summer breeding grounds extend through the rest of northern North America and into Canada. Their displays are visible through most of New England, including our own backyard in central Pennsylvania! With this convenience in mind, every April night is a fair opportunity to witness a natural ballet. However, seasonal patterns always play a significant role in natural history sightings, and woodcock are no exception.  I have learned the hard way that as soon as the snow melts, the birds disperse and become more difficult to find. Lucky for us, woodcocks remain in this region for their breeding season, and therefore April is not the only time to find them. However, their camouflage is incredible. While there is still snow on the ground they must congregate in what few patches of soft ground exist; however, once more thawed territory unfolds, they spread out and are therefore much more difficult to flush. Their unique “peent” becomes the best way to locate prime seating for the nightly drama. Whether easy or not, locating these birds is well worth any sum of time, and I can testify to the sense of privilege and satisfaction that follows the discovery of a woodcock singing ground.

I find myself hard-pressed to feel nonchalant towards these animals, in part because the firsthand experience of witnessing their unique communications stirred a new chord in me. Perhaps it was simply respect for the efforts they put forth towards courtship, or perhaps it was the knowledge that I was witnessing a behavioral thread that has been in place for thousands of years. Regardless of the root, my fondness for the species is undoubtedly linked to the mystery and playful allure that walks hand in hand with this bird’s breeding season, adding elegance to the transition of spring and reminding onlookers that there is no limit to what moves a girl might fall for. 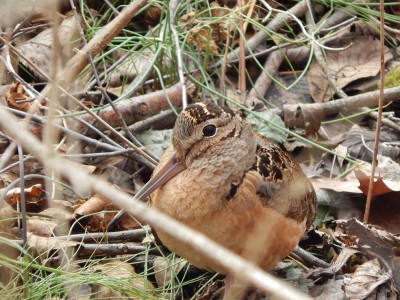 With photos by Jerod Skebo and Rodney Campbell.