There is a creature that sifts through Pennsylvania soil, a slender slice of sky with yellow stars painted upon its body. As spring approaches, she waits for a warm, wet night that will trigger her emergence. She will crawl towards the same pool that hosted her as a larvae, and become the center of a “congress,” a swirling mass of males, eager to pass on their genes. She is a spotted salamander (Ambystoma maculatum), and this spring I observed her breeding season closely, only to find that once again, nature is wonderfully confounding. 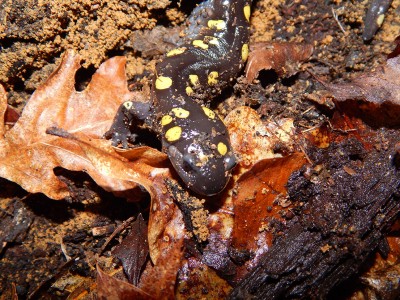 Often explosive, amphibian migration occurs when rain and warm temperatures meet. Under the cover of night, various species will cross treacherous terrain (such as roads) to reach their destination. The first time I witnessed the spectacle, I spent the better part of two hours with a flashlight, an oversized raincoat, and my nose to the ground. That night I vowed to make it out every spring for the rest of my life. Such creatures are just not worth missing. 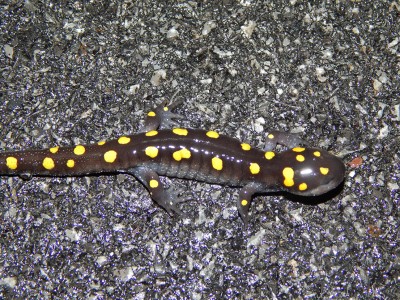 One of the largest salamanders that inhabit the forests of eastern North America, spotteds belong to the family of mole salamanders. Implied in the name, this group of amphibians spend a large portion of their time underground in burrows. They reproduce in vernal pools, temporary bodies of water characterized by the fact that they do not host fish, which commonly feast on amphibian eggs and larvae. The pools are typically small and shallow, occur near woodlands, and dry up at some point in the summer. This means that amphibians with slow development cannot breed in vernal pools, or they run the risk of their habitat disappearing before the offspring are ready to leave the water (though amazingly, quite a few species can speed up their development, depending on the temperature of the water). 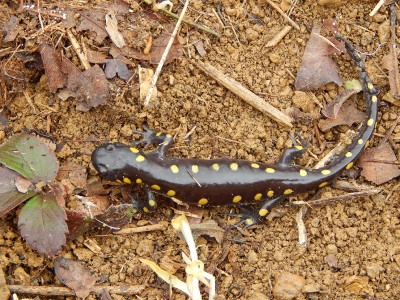 Once they have arrived at their pools, spotted salamanders engage in a “dance” prompted by males who rub and entwine themselves with a female amid a swirling mass of competitors. After persistent nudging and enticing, a male will deposit spermatophores that look like tiny vertical white parcels. As the dance comes to a close, the female may or may not choose to accept her suitor’s offerings. If she accepts she will hover over his spermatophores, and draw them into her body. Most salamanders fertilize internally, and a few days later she will lay up to three egg masses which then remain in fertilization for one to two months, finally hatching into tiny larvae.

The first time I saw a female laying eggs, I thought she was hurt. Her body was twisted, and her tail jutted out at an odd angle. She lay motionless, eyes open, unresponsive to my presence. A few days later I was in the right place at the right time, and witnessed another small female searching for an adequate stem upon which to deposit her eggs. She seemed unable to make up her mind, trying out various pieces by wrapping her arms and legs around them, and swirling with elegant flourishes of her tail. Then she would let go, and grab for what I presumed was a “better” clump of plant matter. Finally, she settled on a shrubby entanglement, and giving it a bear hug, she began laying. 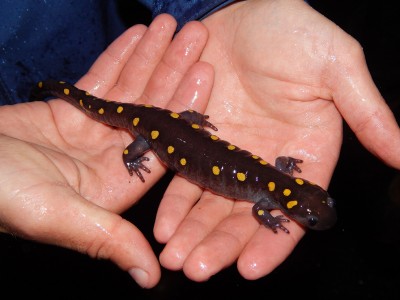 A few days later I returned, only to find myself confused, for her egg mass had doubled in size and changed color! Each mass was now large and swollen, with a white film around the entire glob. This change in appearance is natural, but my untrained eyes were surprised. After a day or so the eggs absorb water and expand, turning into large puff balls of potential life. Masses will vary in milkiness, but some will develop a green hue from algae that collects on the outside of the gelatinous mass. This algae forms a symbiotic relationship with the young salamanders by providing them with necessary oxygen, and in exchange the algae mooches off the carbon dioxide breathed out by the little ones. When the carnivorous larvae hatch, they feed on whatever is living inside their pool until they are grown enough to embark out into the world (70-100 days), bidding their time until they too return to the same pools and contribute their own genes.

The cycle of salamander life is one of seasonal predictability, and each step is full of surprises, from migration to egg to larvae. For those nature enthusiasts that are skeptical of the rain,  herein lies a marvelous opportunity to embrace the liquid sunshine and witness a golden nugget of spring phenology; a parade of frogs, toads, and salamanders swishing their way through warm rain and flashlight beams, their evolutionary heart set on a place they once called home. 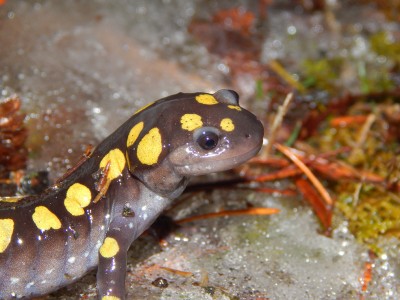