Microstegium vimineum, more commonly known as Japanese stilt grass, is an invasive plant that has begun to sweep across the eastern United States, taking over areas of native forests. This plant can be seen all throughout the woods of Pennsylvania, down to areas as south as Florida and as west as Texas and Oklahoma. The presence of Japanese stilt grass is troublesome due to the fact that it is difficult to eradicate and can be extremely detrimental to the natural environment. 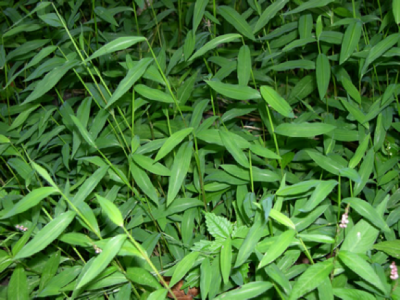 Although native to Asia, this plant has been growing in the United States since the 1910s. Conservationists suspect it arrived here after being used as packing material for shipments from China. This grass can be found growing in nearly all of the forests surrounding Shaver’s Creek, typically lining the trails and standing around ankle height. Stilt grass was named for its straight and frail stem, having long, narrow, and smooth leaves with pointed ends and no teeth along the edges. (It also has a distinctive “greasy” line on the blades of the leaves.)

It has a shallow and weak root system, therefore making it very easy to weed. At first this would indicate a mild invasive plant. However, Japanese stilt grass has extremely durable seeds, which can remain dormant but still able to sprout for up to five years. This causes major problems considering only one plant of this species is able to disperse hundreds of seeds each season.

Stilt grass has presented a severe ecological problem due to its invasive nature and durability. This plant sweeps through forests and takes over the area where natural vegetation grows. This disrupts the forest habitat by dominating over native plant species, which can then interfere with the ecosystem for wildlife and change the soil makeup. Although pulling up this plant can be an effective form of removal, its widespread presence makes weeding strategies difficult due to the sheer number of plants that can occur in any one area. Landscapers and conservationists are paying close attention to this issue in order to keep the stilt grass from dominating native plants, but the future of our forests may be in danger from these little green stilts. 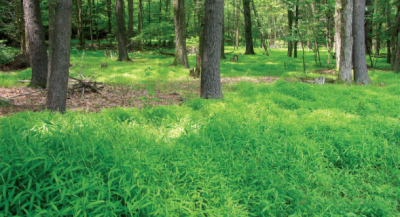 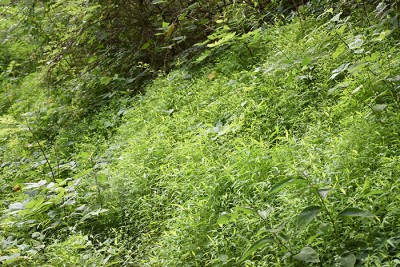 University of Georgia. Center for Invasive Species and Ecosystem Health.