I donned the Wood Cookie that I had made for Outdoor School during my undergraduate semesters at Penn State, but this time it wasn’t to head to Camp Blue Diamond. This time it was for my last week of Shaver’s Creek Summer Camp. My name is written in black sharpie on the front of this cross­cut of a young maple, it doesn’t read Andrew Hayes, but instead “Carbon”. This is my nature name, and one that sometimes rings truer than the one on my birth certificate. 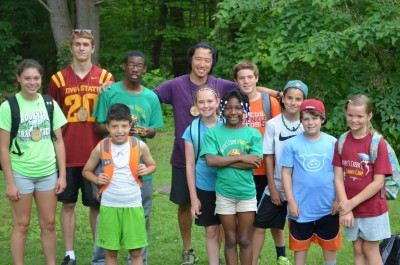 It’s part of the magic that is Summer Camp.

Sure, during the week, I did a lot of education about the natural world, and we also promoted team­ building and empathy, but what I sought to create most of all is a positive outdoor experience.

I watch as some of my campers turn over a stone in the creek, spot a macroinvertebrate that is small and flat, and immediately turn to ask me. 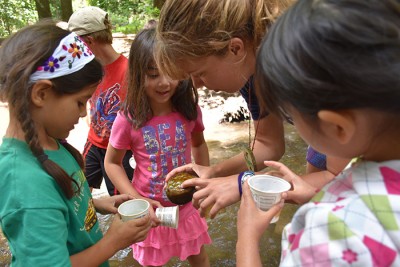 I resist the urge to just spill the answer from my lips, but instead I redirect.

“What do you notice about it?”

I watch as their collective brows furrow as they lean as close as they can to the rock. They throw out their amazing observations about its movements, its home, and even what sort of stone it seems to be living on. I show them a printout of a field identification guide, and guide them through finding the answer for themselves. Their fingers glide over the laminated sheet, and land upon the water­-penny. I simply nod to affirm their conclusion, and watch as their furrowed brows raise and become radiant smiles.

They did it; they found something that they didn’t know, and then they figured it out. I could have just told them the answer as soon as they approached me, but if I had, some of the magic would have been lost. The kids might remember some of the little teaching moments when we find something interesting on the trail, or when waiting for someone to catch up after tying his/her shoe, but what they will wholly remember are the friendships made and the empowered curiosity felt. 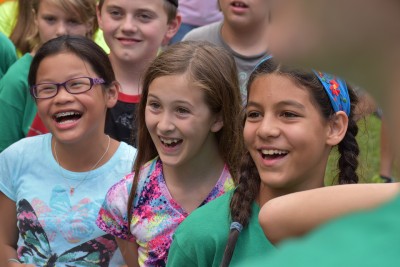 It is that curiosity that will allow them to keep on discovering and forging connections.

Connections between people and places, people and nature, and people and people. It is that curiosity that will allow those little humans to continue to ask questions and also know that they have the ability to find the answers.