As I walked through Shaver’s Woods in the early evening a familiar sound quietly hummed through the forest: “katy-did, katy-did.” I began to turn and listen closer to the melody that it played. Sometimes the best finds aren’t even ones that are seen, but heard. The distinct sound of the katydid is one of the critter’s most notable traits; its name was based off of this, after all. Both male and female katydids can make this sound but it is most commonly heard from males attempting to attract a mate. The tone of the trill correlates to how fit that particular insect is and therefore how good of a mate he would be.  This tone is created by the act of what is called stridulation. One of its wings has a “file” on the side of it that when rubbed with the other wing creates a sound unlike any other. The opposite wing has a “mirror” which radiates the vibrations of the rubbing, acting as an amplifier.

I continued to listen to this marvelous sound and tried to hone in on where it was coming from. I looked around as the sound grew louder, and sure enough, there was a katydid perched on a leaf behind me, very still. As I drew closer I took in the beauty of this insect. The oval shaped bodies of katydids are camouflaged to match a leaf with the green color and intricate veining. Katydids generally do not fly unless they feel increasingly threatened; they very much prefer to climb to where they need to go. Therefore, looking like a leaf is very useful adaptation.

These marvelous little insects begin to make a more prominent appearance in the latter half of July when they begin to mature to adult size. The lifespan of a katydid is generally less than a year. They hatch in the spring and lay eggs, often beneath dirt or on stems, when they are mature at the end of the summer. By that time, the life of the katydid is beginning to come to a close, though there is hope in those eggs that they will survive through the winter and hatch in spring to begin the cycle again. 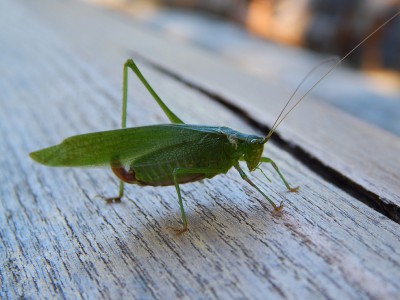 There is a special significance in the fact that each katydid only lives for a few months out of every year. For them it may seem to be normal, but for us as humans it seems like such a short, almost miniscule, amount of time. This just shows how fleeting life can be, and for those katydids, it is important that we listen to their song, take in their beauty and see just how amazing these insects can be, because you will only see them for a few months out of every year.