Titmice, Juncos, and Cardinals, oh my!

As a native Southern Californian I have not experienced many harsh winters. The closest I have gotten to a real winter was during college in Oregon, but the snow only lasted about a week. I decided I was ready for a change and headed to Pennsylvania for the fall environmental education internship. I have enjoyed watching the leaves change and wearing turtlenecks, but have been nervous waiting for the temperature to start dropping.

Like me, many animals are wary of Pennsylvania winters. By now most of the turtles, snakes, and frogs have found their hibernating spots for the winter and will not return until leaves start appearing on trees again. Even humans seem to slowly disappear and move indoors, enjoying the comforts of their wood stove. Many birds have made their way south following their source of food and warmth. But there are still some animals who live in the cold winters of Pennsylvania. 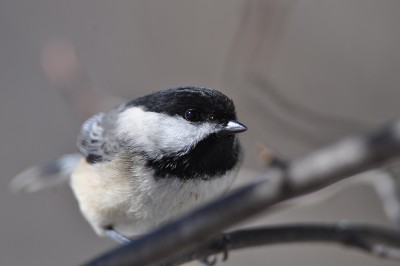 One of these animals is the Black-capped Chickadee – its song can be heard throughout the woods, “chickadee-dee-dee,” all year round. The chickadee can be spotted hanging out on barren trees and is a common bird to see at bird feeders. At Shaver’s Creek you can typically see about three to four chickadees eating seeds out of our feeders at one time. Along with chickadees you can also see a variety of birds and squirrels around our feeder site. Other birds include Northern Cardinals, American Goldfinches, Downy Woodpeckers, Carolina Wrens, and the list goes on. All of these animals can be watched from the comfort of your own home, all while participating in a decades-spanning citizen science project — Project FeederWatch.

Project FeederWatch is associated with Cornell Lab of Ornithology and runs for 21 weeks during the winter, November through April. Project FeederWatch is one of many citizen science projects, which depend on the general public to collect and report data for scientific research. Anyone can join this program, from nature centers to families, as long as you have a bird feeder in your backyard. FeederWatch started in Canada in the mid-1970s and joined forces with Cornell Lab of Ornithology in the late 80s. Since then the program has gathered more than 20,000 participants and continues to grow. 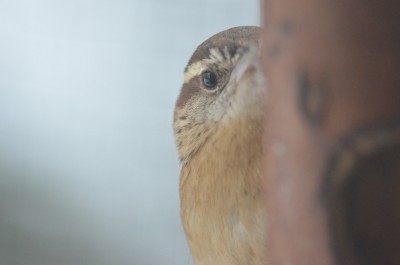 Shaver’s Creek has been participating in the project since 1996. Tufted Titmice, Black-capped Chickadees, and Dark-eyed Juncos are just a few of the birds perusing the feeders at our site during the late fall and winter. Every morning during FeederWatch season, a staff member puts up bird feeders filled with either black oil sunflower seeds, thistle, or peanut butter hoping to attract wintering or migrating birds to our site. Our watch site is located right outside the large bay window in our Lower Classroom, which makes witnessing the movements of the birds easy and allows the staff to stay toasty by the wood stove while counting.

Each Monday and Tuesday we record different species of birds visiting our feeders and their quantities. During those two days staff will keep track of the birds at the feeders and record them on our FeederWatch tally sheet. Once a bird has been identified, the number you can see at one time is recorded. For example, if you were to see one Cardinal and three White-throated Sparrows you would record the species name with the corresponding number. If later in the day you see more than the previous number of birds at the site you record the higher number — but never add them together. We do not know if they are the same birds returning or different, so if we were to add the two counts together it would not give us reliable population data. 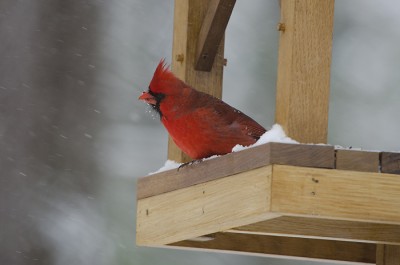 Submitting our data to the FeederWatch website allows Cornell to see patterns of winter birds – where they are located, where they travel to, and their population size. Shaver’s Creek has counted a total of 35 species of birds and has reported a few uncommon species, such as the Pine Warbler and Northern Flicker, throughout our 20 years. All of the data collected is valuable and helps to improve scientific knowledge of how birds behave during the winter. FeederWatch data has been used in several scientific papers dating back to 1989. These studies feature a variety of topics ranging from climate change to invasive species to mycoplasmal conjunctivitis, an eye disease in finches. Just by sitting indoors and counting birds as they nibble on your seeds allows you to actively be part of the scientific community.

This is my first time participating in Project FeederWatch and I am enjoying watching and becoming familiar with the birds visiting our feeders. I have already seen species I never had before and jumped for joy when I spotted my first Red-breasted Nuthatch. Winter is the perfect time for a beginner birder, like myself, to learn how to identify Pennsylvania birds. On those cold days when my California-grown body doesn’t want to go outside I can still participate in scientific research and further my knowledge of winter birds. Even though many of Central Pennsylvania’s animals have moved south for the winter, a few still remain and other migrators will be traveling through. I am excited for the flocks of Pine Siskins to make an appearance and hope for a Sharp-shinned Hawk or two. When you visit Shaver’s Creek, be sure to check out our observation window and test your skills at bird identification or enjoy the peacefulness of bird watching. You might just see a staff member doing the same exact thing.

If you want to know more about Project FeederWatch and how to become a FeederWatch participant visit their website, feederwatch.org. 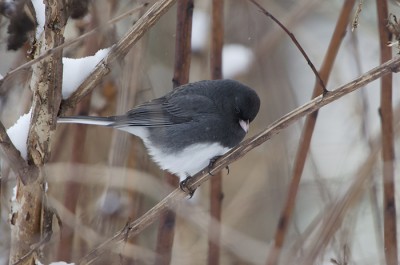 With photos by Alissa Pendorf (Cardinal and Junco)