Music of the Ice and Snow

Late during the third week of January, the spring interns here at Shaver’s Creek ventured down the hill from the Center to Lake Perez, frozen over with eight thick inches of ice. Standing on the floating dock about an hour before sunset, we each extended a nevertheless hesitant toe onto the ice sheet, followed by a testing step, and finally a secure walk on water. After a few minutes of yelping when we thought we heard the ice crack, we settled into confidence. As I discovered later, 8 inches of ice can support 2,000 pounds in any one place. None of us had stood in the middle of a frozen lake before, and we were overly cautious — but perhaps not unsurprisingly. 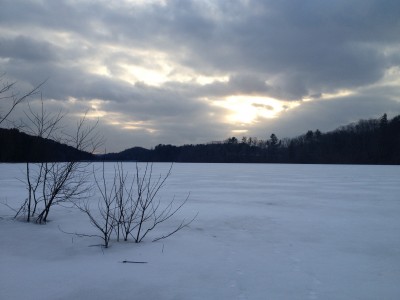 The lake frozen-over should perhaps no longer be called a lake because of the extreme change that the cold of winter imbues upon it. Unrecognizable as a lake, this flat stretch of icy meadow stretched cooly before my eyes, dusted with just enough snow to camouflage the dark water below my feet. Though the water on the surface had been immobilized, there was still the rushing movement of wind on the ice, and a strange auditory movement yet to be identified. Intern Matt, with his hands stuffed deep into his peacoat pockets, leaned his ear toward the far side of the lake toward the dam, his expression puzzled.

It was impossible not to notice the low gulps and singing swoops that seemed to reverberate between the mountains around Perez. They were rather eerie sounds, perhaps likened to whale song projected through crackly speakers. The ice was singing.

As I have since learned, ice disperses sound waves, distorting the sounds we expect to hear. The music of the frozen lake is caused by fluctuating temperature, which induces the expansion and contraction of the ice. When water is frozen, the space between the water molecules is actually expanded, and contracts as ice is warmed and melts back into water. What we were hearing on the surface of the frozen lake was likely the cracking of the ice as it expanded. 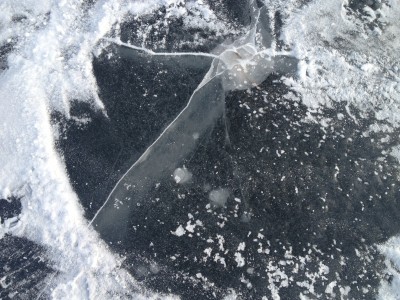 Why did it sound so strange? We’re accustomed to the sounds of cracking ice cubes plopped in a glass of water. But because we stood on Perez’s 72 frozen acres, the 8-inch ice dispersed the sound waves, slowing them, deepening them. According to composer Andreas Bick (who uses nature sounds in his compositions), “the ice sheet acts as a huge membrane across which the cracking and popping sounds spread.” The fissures and pops could have been happening inches below my feet, but they also could have occurred on the other end of the lake. The distance and dispersion of these traveling sounds fascinated me, and I found it beautiful music in my ears.

Two days later, I went out on the ice with interns Alexa and Joe, after it had snowed several inches. The lake was dead quiet. The only sound was the crunching of our boots on the fresh snow – the smashing of tiny snowflake crystals crashing into each other and breaking. But the lake was quiet because of its blanket of white. Snow absorbs sound waves, muffling or even silencing sounds we might have otherwise heard. After a few days, the snow has become glassy and sounds bounce easily off its slick surface.

One of my favorite things to do when it is snowing is to bundle up warmly, and lay myself down into the fluffy carpet of snowflakes. The world is so quiet, as I gaze up into the overcast sky and listen to the stillness around me. Now I have a new, icy symphony to enjoy, and I look forward to opportunities throughout the rest of winter here at Shaver’s Creek to hear Perez sing. 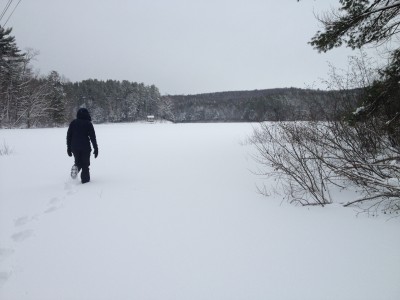