If you visited Shaver’s Creek in the past few weeks, you may have noticed loud screeching coming from the Raptor Center. This is the vocalization of our bald eagles, and although they are often some of the more noisy birds in the Raptor Center, they have taken it to a new level lately. 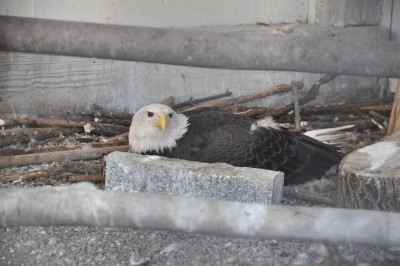 When the eagles started vocalizing unusually often about three weeks ago, Torri Withrow, Raptor Center Intern, noticed that the rake in their enclosure was repeatedly being knocked over. Thinking that perhaps the out-of-place rake was the reason for the bald eagles’ increased vocalization, she diligently set it back up in the corner each time she found it knocked down. When this didn’t seem to placate the eagles, Jon Kauffman, Raptor Center Assistant Director, suggested placing a few sticks in the enclosure, on the premise that the eagles were actually interested in the wooden handle of the rake. Soon, Raptor Center staff noticed the female eagle pulling the sticks into a pile in a corner of the enclosure, and finally concluded that all of the noisy screeching and rake hullabaloo was nesting behavior! 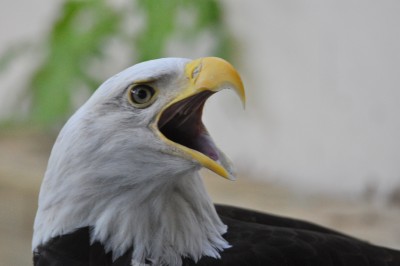 Since this realization, it has since become apparent that our eagles are exhibiting a number of nesting behaviors, the first of these being increased vocalization. Both eagles, but especially the female, screech very loudly when anyone approaches the enclosure — this is a sign of their protectiveness of the nest. The female is also eating a lot, and the male is tending to her, allowing her to eat before him to ensure she gets enough food. This is the first time our bald eagles have nested — and their nest shows it. Although the female diligently assessed each stick that the Raptor Center staff placed in the enclosure, the nest is not much more than a haphazard pile of sticks in the back right corner of the enclosure. Nonetheless, all of these behaviors signal the intense physiological process of egg production, and sure enough, just last week, the female laid two eggs! Although it is unlikely that the egg is fertile, it is of utmost importance that we allow the female to carry out the nesting and egg-laying process because it is so intricately related to her health. Our bald eagles are now taking turns incubating the egg, and we invite you to come out to Shaver’s Creek to check out their nest and maybe even catch a glimpse of the eggs! 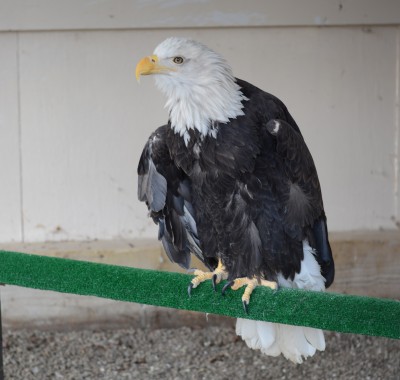 The Shaver’s Creek bald eagles are not the only ones that are nesting right now. Throughout the past months, bald eagles all over the United States have been building their nests or returning to nests that they’ve used for years. Pairs mate for life and can spend up to three months building their 5- to 6-foot nest. Both sexes bring materials to the nest, and the female (like our female at Shaver’s Creek) does most of the arranging. bald eagles prefer to build their nests high in sturdy conifers, and often near water for easy hunting. They need open water in the winter to hunt for fish, but they also prey on birds, reptiles, mammals, and crabs. There are many bald eagle nests throughout Pennsylvania, including one at Raystown Lake and one at Bald Eagle State Park.

Additionally, there are many “nest cams” (video cameras placed near nests) you can observe via the internet from the comfort of your own home. One nest in Codorus State Park (Hanover, PA) gained national attention after the eagle pair weathered intense snow earlier this year to keep their eggs warm, and there are now two eaglets in the nest. Another nest in the Pittsburgh area overlooks the Monongahela River and had three eggs — two have already hatched. Last year, I started watching a nest cam at Berry College in Georgia, and this year the bald eagle pair already has two hatchlings. I highly suggest giving a few nest cams a look as it provides a unique opportunity to be able to observe the behaviors of the eagles and eaglets close-up.

Bald eagles are only found in North America, with the majority in the United States. This is one of the reasons that they are our national symbol. Bald eagles were listed as endangered in 1978, and were taken off the list in 2007. Populations are now increasing and the species is protected under multiple acts. However, with no natural predators, humans are bald eagles’ primary threat. Trapping, shooting, poisoning, and destruction of habitat are among the top threats to bald eagle populations. Just this month thirteen bald eagles were found dead near a farm in Maryland. The cause of death is still in question, but authorities are suspicious of poisoning from agricultural pesticides. This story reminds us that although the species is protected and populations are increasing, we need to continue to be aware of even the indirect effects of our actions on this beautiful and important species. Visit Shaver’s Creek, the local nest, or a nest cam to learn more about bald eagles and the fascinating lives they lead. 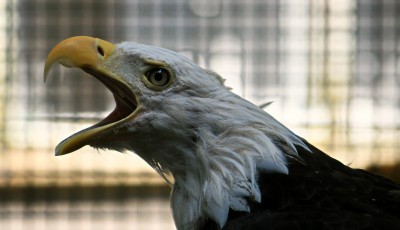