“Almost everything concrete we know about wild birds we know from banding them.”  — Scott Weidensaul

This past February I had the privilege to travel to Honduras for twelve days with ten enthusiastic birdwatchers on a birding for conservation tour. With a tally of over three hundred species on the trip, it’s hard to think back and narrow down the most exciting bird sighting or experience. Everything had its moment. Soaring raptors took to the sky each day and egrets and herons waded patiently along the water’s edge. Black-headed Saltators, Mountain Trogons, and Common Chlorospingus calling among the treetops.  Seven days into the trip our group visited Rio Santiago Nature Resort on the edge of the Pico Bonito National Park. In addition to seeing the Spectacled Owl, this resort provided opportunities to see some of Honduras’s amazing hummingbirds, from Long-billed Hermit and Green Violetear to Central America’s largest hummingbird, Violet Sabrewing. The resort provided up to thirty feeders for thirteen species of nectar-loving hummingbirds and it was a full-time job to keep these filled. I was able to sit and eat a delicious meal of eggs, beans, tortillas, plantains, and fresh coffee as the hummingbirds buzzed, zipped, chattered, and wet their tongues with sugar water. I spent hours sitting and observing the different markings of each individual. 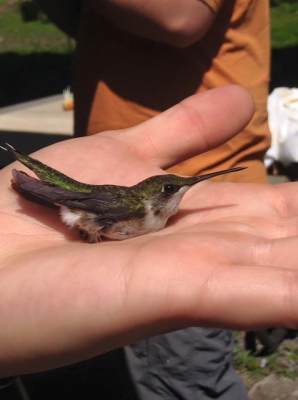 In early August of this year, I was once again given the opportunity to visit a hummingbird station, but this time it didn’t involve a flight to Honduras or to any of the neighboring countries in Central America. This station was located right here in central Pennsylvania at a small homestead outside the town of Coburn in Penns Valley. Shaver’s Creek staff was invited to visit the homestead of Jan and John Reed to soak in this magnificent sight. In approaching the property, we meandered through the ravine that has been carved by Penns Creek and slowly passes small cabins placed at the base of the steep slopes of First Mountain ridge.

As we approached the Reed residence we observed at least twenty red-colored feeders hanging on the beam of their wrap-around porch. A young woman was already holding what seemed to be a Ruby-throated Hummingbird in the the palm of her hand, while another visitor was taking a photograph. 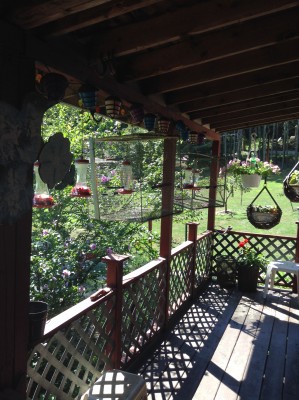 Under a small white pop-up tent we met with fellow naturalist and bird bander, Sandy Lockerman, and her assistant. Lockerman is one of only six hummingbird banders in the state, and she had traveled north from Harrisburg to place aluminum bands on their hummingbirds. Seated under the shaded tent, Sandy was collecting wing length, tail length, weight, and beak length. Fat on each hummingbird she captured was also recorded by using a straw to lightly blow aside the feathers. When Lockerman first started banding hummingbirds she wanted to compare the data that she was collecting to historical data, but was surprised to discover the lack of historical data. The migration of hummingbirds is still somewhat a mystery.

The Reeds don’t have this many feeders up year round. With the fall season quickly approaching, the Ruby-throated Hummingbirds, Pennsylvania’s only nesting hummingbird, are beginning the journey south to areas such as Honduras. At this time of year the Reeds devote their time to supplying these small birds with food as they migrate through the area. But what is drawing them to this particular site? Lockerman theorizes that this area has what they need to maintain a successful flight to the south.  There are plenty of conifers that supply shelter and sap for food. A little known fact is that hummingbirds will also eat insects that are attracted to sap — a great protein food resource.

This site is also located at the base of a migratory ridge that connects to two major ridges, Tussey Mountain and Stone Mountain. If you spend any time atop Stone and Jack’s Mountain Hawkwatches in the fall, you know that Ruby-throats are often seen migrating. On September 14, 2015, hawkwatch volunteer Dave Kyler tallied 28 individuals on Stone Mountain. Like hawks, falcons, and eagles, they use the Appalachian Mountains as “leading lines” to guide them on their journey. Once the leading lines disappear into the landscape, migrants will then use the coastlines, eventually bringing them to bottleneck to south Texas. It is here that individuals will build their fat reserves to anywhere from 2.5 grams to 4.8 grams, almost double the weight Sandy records in Pennsylvania. It’s a 15–18 hour flight to Central America across the Gulf of Mexico, sometimes 36 hours. They need these fat reserves to help with this long journey. 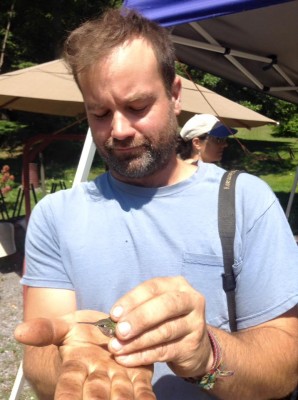 A day before I had visited the Reed residence, a question was brought up at a family gathering: how long should one keep their hummingbird feeders up in the fall? The majority of the hummingbird migration continues through September and begins to dwindle away near the start of October. Keeping the feeders available to any late migrants is OK too, and some people even keep them up through the month of December. This action does not keep hummingbirds around longer than they would otherwise, but gives us an opportunity to see western species of hummingbirds that sometime mysteriously show up in our area in the later months of fall and winter. A Black-chinned Hummingbird appeared in Franklin County in 2013 on November 13 and stayed around until November 25. One Anna’s Hummingbird visited a residence in Berks County in November of 2010 through February of the next year. In November of 2013 birdwatchers flocked to observe a Rufous Hummingbird in Lemont, PA.  All of these hummingbirds took advantage of home owners’ dedication to keeping the feeder filled.

So get your sugar water ready and keep them going into January. If you get a visit from a hummingbird in November or December, it very well could be a western species! Please contact Shaver’s Creek Environmental Center if you observe a hummingbird in late fall. We would love to visit with you and assist in the identification. 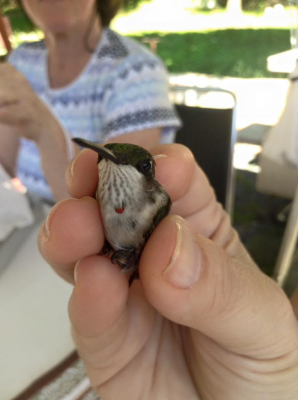 Looking forward to fall migration and I hope to see you in the field!

September marks the start of the Stone Mountain and Jack’s Mountain Hawkwatches. Every day until the end of November, volunteers will be manning these two sites tallying migratory raptors, songbirds, waterfowl, and the amazing monarch butterflies. For more details and directions, don’t hesitate to call Shaver’s Creek or visit hawkcount.org for more info.

This article was also printed in the September 2016 issue of The Valley.

With photos by Abby Hileman.