Through June and July, we hear song birds call out to the dawn and the dusk, their beautiful melodies serving as an affirmation that summer has arrived. 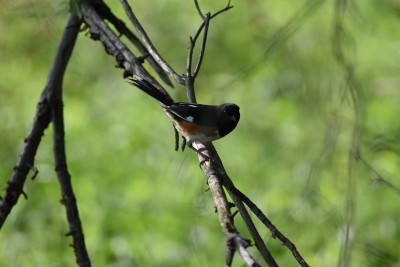 Summer for birds is a critical time for mating and nesting. Their calls to each other primarily serve the purpose of either attracting a mate or defending territory. In these months we are afforded the privilege to listen to this symphony of the struggle for life. Walking into most any wooded area we hear a Wood Thrush’s flute-like voice climb and ring through the forest. Though we may not see their speckled chests, we certainly know of their presence through their distinctive and haunting melody. 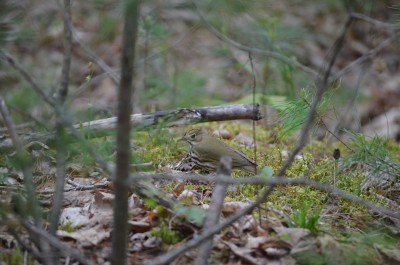 We hear the Ovenbird’s high and sweet song crescendo as it calls a steady tune out into the trees. We hear the Eastern Towhee’s upbeat song swing through the air with ease, and we hear the tune of the Red Eyed-Vireo as it chirps tirelessly. Yet by the end of July, and the beginning of August, these songs seem to silence. This absence of bird song feels strange in the peak of summer, but by July, many birds have nested, mated, and their young have fledged. Concerns of attracting a mate and defending territory have morphed to concerns of teaching young how to fend for themselves. Towards the end of July and the beginning of August, songbirds which once seemed to fill the forest with sound seem to vanish with silence. However, at this time, birds are more abundant than ever. During spring migration, bird populations face losses due to the stress of migration and wintering. In summer, food availability is increased, and nesting and mating are in full swing. While these birds may seem to us to disappear silently, they are more present than ever. 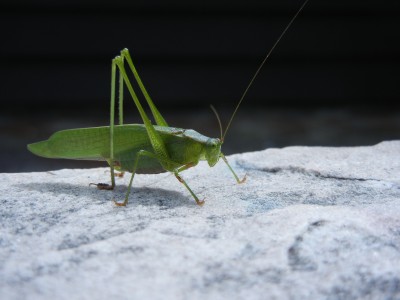 As evening steps across the sky of early August, we hear the swell of a new chorus. As light grows long across the hills and forests, peeking between blades of grass and branches of trees, the song of insects begins to rise. It is no longer a collection of melodic songs of birds that call through the evening, but a great wave of percussion buzzing and ringing through dusk.

Orthoptera is an order of insects in which some species have the ability to produce sound by rubbing their wings against each other or against their legs. The main insects from this order we hear on August evenings in Pennsylvania are crickets and katydids. In early summer, those silent percussionists were eating, maturing, and molting. By late July and early August they reach sexual maturity. The tireless buzzes and clicks that fill fields and forests both day and night can be accredited to males. Their songs’ primary purpose is to attract females, but they also can be a warning to other males to keep their distance.

As the sun sets and this song swells, the buzzing and clicks of countless individuals can seem like cacophony to the uninformed ear. But as the sun begins to set, take a moment to try to listen past the wall of sound. You may hear something incredible. You may hear the song of a single cricket or a katydid among the chorus. Once you hear one song, you cannot help but hear them all. There is something incredible in how the call of each individual melds together so seamlessly. Enjoy the songs of summer.