At the end of every week of Outdoor School, we have a Community Meeting for the campers, during which a fictitious business person comes and draws a map of “improvements” for Camp Blue Diamond and Outdoor School. The camp as we know it gets decimated, which is upsetting for many campers. One way we help those who get very emotional about this is to see if we can come up with some compromises between the proposal and keeping the camp the way it is. This is how one of my campers, R, ended up creating a list of almost a dozen compromises to improve Camp Blue Diamond without changing the spirit of it. Among these were some fairly predictable options, like getting softer beds and enlarging the Dip (the bathroom all of the campers use). But one of her suggestions stood out among the rest; “Create a cabin that people with broken arms and legs can get to so they can come, too.” 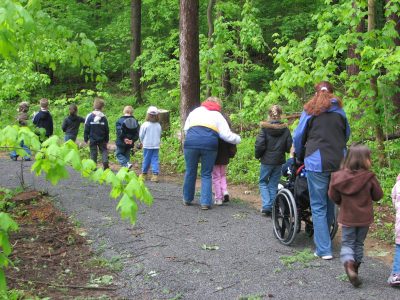 Now, Camp Blue Diamond already has one wheelchair accessible cabin, but R’s suggestion got me thinking. What would I do if I had a camper in a wheelchair? How could I change the lessons I usually teach out on the trail to be inclusive of anyone who might be in my group? Would I even be able to take the group out on the trail, or would I have to find other places outside to teach?

As chance would have it, I had the opportunity to answer these questions the very next week.

At the end of R’s week, Xylem, the Outdoor School Program Director, pulled me aside and asked me if I would be willing to have a camper, H, in a full-leg cast and wheelchair in my Learning Group. H was going to be a day camper, arriving just in time for the morning lesson, and leaving shortly after dinner every day. Of course I said I would love to have her, and spent the weekend planning how I could have all my normal lessons without making anyone feel like they were “missing out” due to the modifications I knew I would have to make.

The modifications began almost immediately. At Outdoor School, barring a thunderstorm, all of the lessons are taught outside, usually while traveling along the trails surrounding Camp Blue Diamond. Of course, that was out. H was only temporarily wheelchair-bound, so we assumed it was a basic set-up, not something that would be able to handle the roots, rocks, and other bumps in the road that you might find along an unpaved path. That was an easy fix; I found several interesting areas around camp where we could easily help push H to have our lessons. I also spoke to the staff and other Learning Group Leaders about letting me have several strong counselors to help me with H’s transportation, which they all agreed to.

Next up were the lessons where campers needed to sit on the ground in order to study: Soil Survey, where they dig through the soil and record their observations, and Mini Ecosystem, where the campers find interesting natural features on a very small scale and turn them into their own ecosystem. After asking around, I realized that I could bring a tray with me to put on H’s lap. Her group would bring the soil and the park up to her level, rather than us trying to get her down onto the ground and then back up.

Third, I thought about the more active running games. We could play them on the basketball court, where pushing H would be easiest, safest, and least tiresome. They would also need to become walking games to reduce the chance that any of her fellow campers would run into her leg. I knew that I would need to emphasize for my counselors that it was H playing the game, not them. She would get to decide where she was going, who she was trying to tag or partner up with, and we would be in charge of getting her there. The decisions were hers and hers alone to make, we would just be the motor. 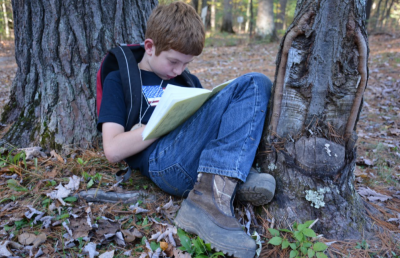 Fifth grade is an interesting age, where some of the kids are still quite small, but some have had a growth spurt, and it was our understanding that H fell into the latter category. Which meant that I couldn’t just make one of my counselors give her a piggy-back ride to the stream — an admittedly terrible idea to begin with. The solution I came up with was not ideal, but all I had: we would go to the stream first thing in the morning, hoping that H’s ride was running late and she wouldn’t have to hang out in the lodge with the directors for too long before we came back for the rest of the lesson.

H ended up not coming to Outdoor School. Between the cold and the wet and the leg, her parents decided it was best for her to stay at normal school for the week. But still, it was interesting to think about, and I posed a question to my campers at the end of the week during the Community Meeting for them to think about. “You know, H was supposed to join us this week, but she’s in a wheelchair right now. I know we have all loved going out on the trails, and that you think it’s important to leave the trails as they are to protect the trees and the other wildlife, but I wonder, do you think it would be nice to pave one or two of the shorter trails so that H and other people in wheelchairs might be able to come enjoy Outdoor School?”

On the one hand, leaving trails as natural and unobtrusive as possible disturbs the landscape less and makes me as a casual hiker feel like I’m really “getting out there.” On the other hand, though, shouldn’t we want our friends with mobility differences to also be able to enjoy the great outdoors? How do we find a balance between the two?

The campers could not agree on an answer, and frankly, I’m still working on one, too. As my internship continues into the spring, I’m continuing to think about how we can make nature accessible to all without compromising the spirt of it.