Take A Load Off!

For the past few weeks, I have been spending a majority of my time preparing for camps, hiking and playing games with campers, and exploring the beautiful natural world around me. All of this running around, playing, and discovering has been more than I could have ever asked for, but sometimes it’s important to sit down and think good thoughts for a while. This notion led me to the decision to build a bench!

I’ve been spending a lot of time at Shaver’s Creek’s wood shop fashioning a relatively simple structure. I was able to use larch wood from the trees that were cut along the ADA Trail, which allowed me to create a wonderful bench fit for a king (a considerably large king). The bench was fully installed yesterday, after weeks of learning to use cool new power tools while obtaining an unbelievable amount of splinters. You can find this bench on the ADA trail, along with some other funky forms of natural art. Promptly after cutting the caution tape off of my bench, I pinned an arched tree (along the same trail) to another neighboring tree, creating a nice natural archway. Pictured below is the construction and completion of the bench, as well as the arched tree across the ADA trail. Come down and see them in person, too! -Juniper, Summer 2010 Intern 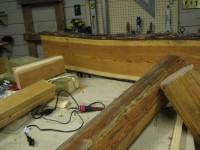 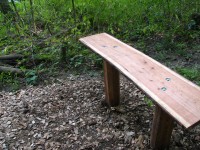 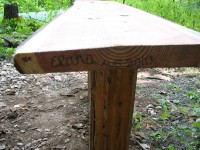 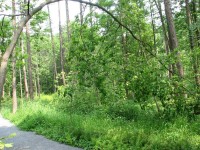 One thought on “Take A Load Off!”