In early May, I visited sites throughout Pennsylvania’s forested land to investigate the presence of Eastern Box Turtles. One of the goals of my summer research project with Dr. Julian Avery at Penn State was to collect data on populations that can be used to guide habitat management. I conducted regular turtle surveys and recorded measurements that can be used to assess turtle age and health. Monitoring populations and understanding behavior is important for the future development of conservation plans to help this critical species!

If you’ve ever had the chance to meet an Eastern Box Turtle in the wild, you know just how special they are. Of the turtles I’ve encountered while surveying, each one has a unique personality. Some are understandably shy, enclosing themselves entirely in their “box” of a shell, while others boldly investigate their surroundings. Their beauty is remarkable, too. Each turtle has a unique pattern, and their color variation is astounding. Seeing an Eastern Box Turtle is guaranteed to be a memorable and beautiful experience.

Sadly, Eastern Box Turtles are a species of special concern in many states (including Pennsylvania), as their numbers have been steadily declining for the last few decades. This is the combined result of factors like habitat loss or disturbance, unsuccessful nests, and poaching for the pet trade which has become a very serious issue. Like many species of concern, Eastern Box Turtles face complex problems.

For instance, turtles’ home ranges are more frequently being intersected by roads, and the early-summer nesting season is when turtles tend to move the farthest throughout their range. They do this in search of mates, nesting grounds, or while foraging for food. Unfortunately, of the six turtles I encountered on a road throughout this summer, three of them were already dead. Luckily, I was able to move the other three to safety. 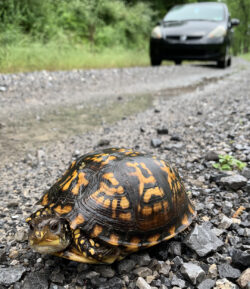 What can you do if you find a turtle on the road?

Road deaths are preventable, and perhaps you could be a turtle hero!

Take care while driving to look closely at the road in front of you. If you encounter a turtle crossing the road, do your best to help it. Pull over where it is safe, observe the direction the turtle was heading, and carefully lift it across the road to safety in that direction! Turtles have incredible homing capabilities, so if they are moved to the side they came from, they will attempt to cross again in pursuit of their destination.

Also, keep in mind that not all turtles are aquatic. Eastern Box Turtles are a terrestrial species, meaning they spend most of their time in forested land and are only occasionally found crossing shallow streams. Some well-intentioned people place terrestrial turtles in bodies of water, thinking they are helping, but this can be dangerous for the turtle! It is always best to just move the turtle to safety in the direction it was going, and then leave it be.

Another obstacle Eastern Box Turtle populations face is nest predation. Part of my work this summer has been trying to locate nests so that we can set up barriers around them, keeping predators like raccoons, foxes, or skunks from digging up and eating the eggs. These medium-sized predators are often more abundant around humans, which means turtles face an increased threat of nest loss in areas with these subsidized predators. 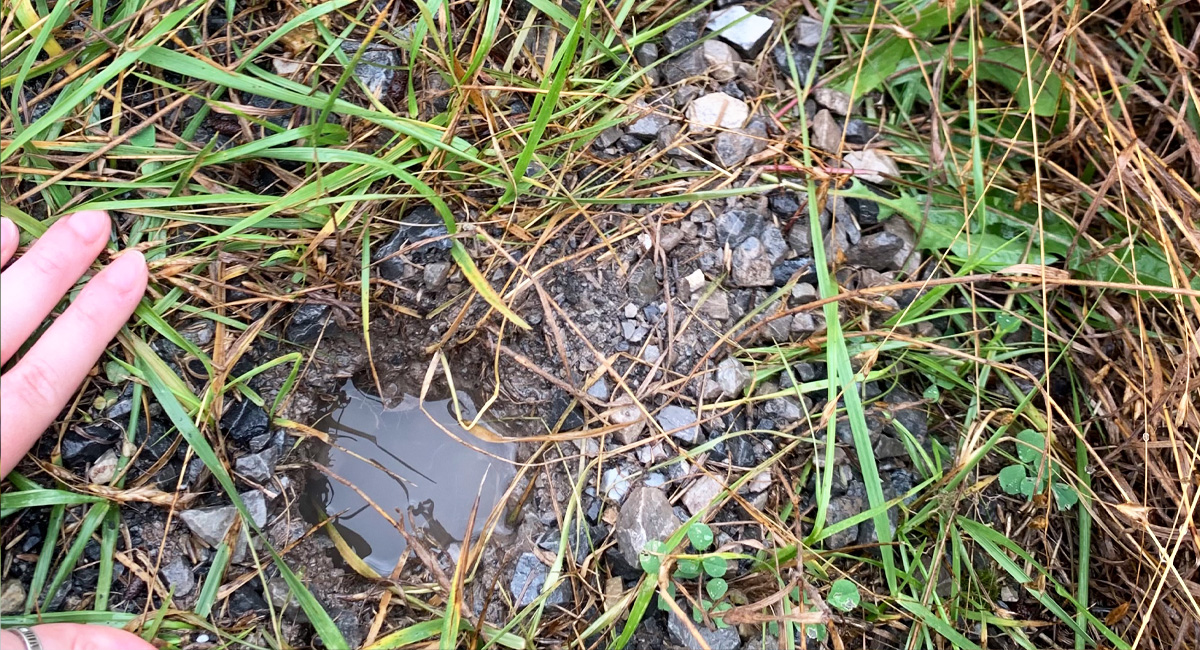 When turtles nest, they dig a hole, drop the eggs in, and then cover them back up. Locating nests before a hungry predator, who has an elevated sense of smell, is not so easy. We’ve already come across many that have been dug up, and it’s heartbreaking. Pictured above is a disturbed nest from one of our sites. You can see the hole (filled with rainwater), and just above the picture were white, curled up eggshells that were left by whomever ate their contents. Despite many unsuccessful nesting opportunities for the turtles, we managed to set up barriers around three active nests and are hoping to see hatchlings emerge from them soon!

If you are lucky enough to encounter a nesting turtle in your yard or on your property, you may be able to help by keeping pets away and avoiding activities like feeding wildlife that would attract animals to your yard!

Perhaps the most important issue facing Eastern Box Turtles is humans removing them from the wild to be kept or sold as pets.

This is a huge problem for the persistence of wild populations. If just one reproductively mature female is taken from the wild, then so are the many, many offspring she had the potential to produce throughout her lifetime. It’s very hard for a turtle to reach adulthood, but when they do, they can live for decades, which means any single individual is super important to the species.

Reptiles, in general, are not easy pets to care for. This often results in the owner getting tired of them and inappropriately releasing them into the wild, or the animal getting sick and dying prematurely. When we move animals around, we are putting them in unfamiliar territory and potentially introducing diseases. We know turtles often continue searching for their homes indefinitely, when displaced, leading to unfortunate outcomes. We also interfere with their genetics when we move animals from one place to another. We have the potential to cause additional harm by weakening adaptations that populations evolve in response to local conditions. There are many alternative pets that can be properly taken care of, and it is much better if we don’t remove animals from nature. 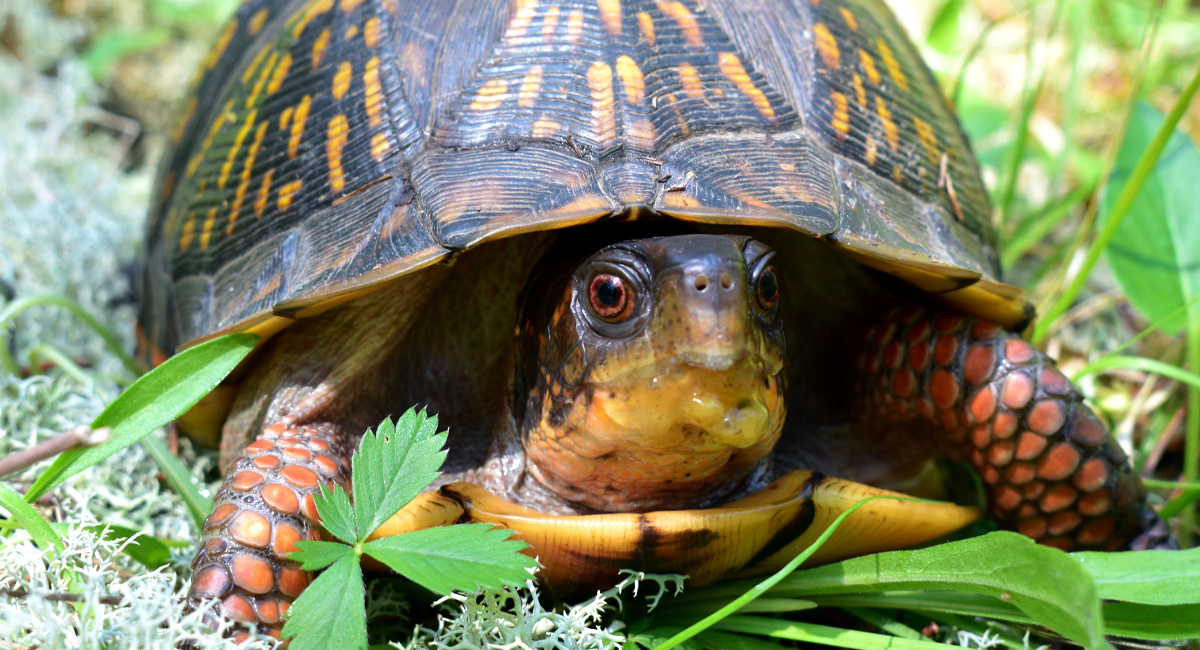 Hopefully by now you agree with me that this species is worth protecting! So, remember, if you come across a wild Eastern Box Turtle, appreciate it, move it to safety if it’s in danger, and then leave it be. If you take photos, share them, but don’t include a location with your posts! We need to do everything we can to preserve the happily wild existence of these creatures.

For more information check out Dr. Avery’s lab and the Department of Ecosystem Science and Management.

One thought on “Eastern Box Turtles: a Declining Gem of Eastern Forests”