Seeing with New Eyes: The Butterfly Count at Shaver’s Creek

The orange butterfly weed seemed a hub of gustatory commerce as dozens of dusty wings set it to motion. With the sun high overhead, three humans garbed for the hunt took to the meadow. I was in my rubber boots (for blocking poison ivy) and big hat (for shade), and in my hands, a butterfly net. My companions wielded guidebooks, a high-power camera, and an empty peanut butter jar, for viewing specimens. It was July 10, and we were taking part in the North American Butterfly Association’s Summer Season Count. Three other counting parties had staked their territories near Shaver’s Creek Environmental Center, and, from 11:30 a.m. to 2 p.m., sought to identify as many butterfly species as they could. 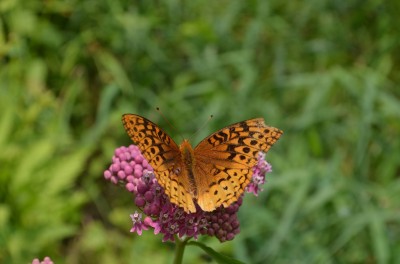 My group’s first stop—Hawk’s View Meadow—proved a fruitful setting. When I began the count, I could identify only two or three butterflies, but soon, with the help of our guidebooks, I savored how the new names felt in my mouth: Great Spangled Fritillary! Pearl Crescent! Silver-spotted Skipper! They sound deliciously outlandish, something out of a storybook.

Not since childhood had I caught butterflies. Now, as I chased after this one, then that one, I found I craved the concentration it took. I was immersed, too full of beauty to worry about my life. Bearing only the key of my curiosity, I was let into their land. I was seeing with new eyes. Whereas before the count, butterflies for me simply adorned the landscape with their dabs of color, they now leapt into focus. To peer into the peanut butter jar was to inhabit an intricate world in shimmering hues. The Common Wood Nymph, for instance, is anything but dun-colored; it is netted in fine dark lines that look like bark, and two large eye-spots on each wing glow against a yellow wash. The American Lady, with wings open, is a lovely enough orange and black; but, wings closed, it reveals what looks like an entirely different insect: its markings are antique rose paired with what seems a pearly spider web. The Baltimore Checkerspot is patterned with dots and half-moons of whites and rusts against a background of black. The Eastern Tailed-blue sports on its periphery a soft white fringe, and, as its name suggests, two tiny tails. 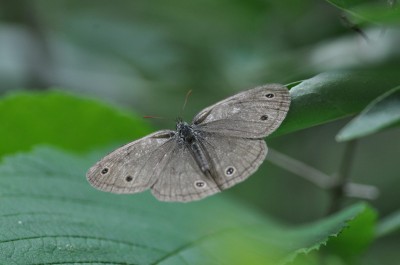 Catching butterflies is a tricky business, I learned. After dashing in vain, there’s a moment of triumph when, after swooping my net down over some flowering plant, I see wings flit into the upheld column of the net. It wasn’t until on the hunt that I realized how flight patterns characterize different species. Butterflies can be distinguished not only by their markings but, as I learned, by the way they fly. The Skippers, for instance, fly frenetically, landing and jumping up, two of them often tumbling over each other in the air. The Fritillaries fly more broadly, flapping their wings in a grander gesture and alighting for longer periods on the flowers of open fields. The Wood Nymphs and the Satyrs seem to like the forest edges and flit through the underbrush.

After lingering long in the meadow, my counting party continued on Bluebird Trail. Handfuls of black raspberries sweetened our trek. We were kept company now not only by the birds I’ve grown to love, but by these new butterflies that caught the sun and wheeled and fanned and sometimes sat still enough to be photographed. 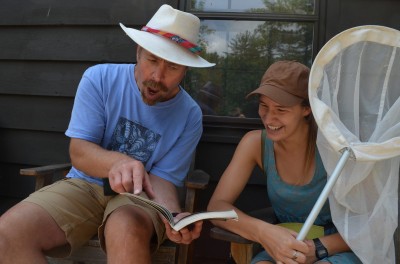 Doug and Zoey prepare for the big day with a field guide.

We converged with the other parties back at the Environmental Center, comparing notes: Fritillaries were commonly spotted, as were Wood Nymphs and Wood Satyrs. There were some big, colorful butterflies found, such as the Pipevine Swallowtail and the Red Admiral. No groups, however, saw a Monarch.

I left the day thinking, what better gallery to visit than the meadow of a July midday, these wings on display in their iridescence? Next time I may bring a magnifying glass and so enter an even deeper world of scales and curled proboscises. It’s an interactive exhibit, perhaps not productive in a worldly sense, but rich in the currency of delight. 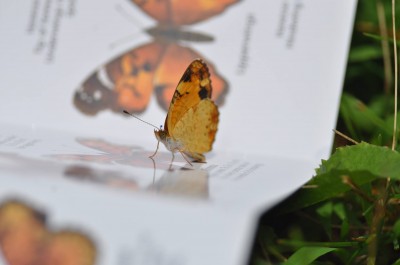 The Pearl Crescent insists upon being indentified.

About the Butterfly Counts:

Three times per year, the North American Butterfly Association (NABA) accepts data from butterfly counts: from spring, summer, and fall counts. Anyone can conduct a count. NABA requires a counting party of at least four observers and six party-hours. A count can be any 24-hour period, starting at midnight. The summer count may be conducted at any point from June 1 to July 31, the fall count from August 1 through December 31, and the spring count from January 1 through May 31. Data can be entered online on the NABA website’s Butterfly Monitoring page. 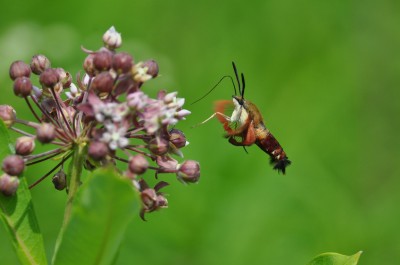 With photos by Joshua Potter.