The fall season has so much to offer. Whether it is the beauty of the changing leaves or just the crisp air, there is something interesting for everyone. The plethora of leaf litter and dead flowers brings dreadful anticipation of winter to some, but to others, this is one of the best times of the year for harvesting.

…Harvesting mushrooms, that is! The sport of mushroom hunting is often considered taboo. It can be associated with witches’ brews and the death of Claudius the Roman Emperor. Minimal knowledge of mushrooms is spread throughout the United States. It is an uncommon subject to be taught in public schools, regardless of the fact that fungi are such key decomposers in every ecosystem. 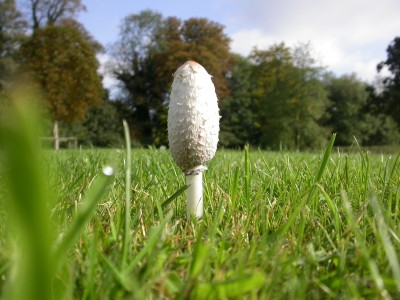 For those interested in mushroom hunting, it can at first seem like a daunting task. There is an incredible diversity in fungi and many are indeed ridiculously hard to differentiate from another species. That being said, there are also certain prized mushrooms and conspicuous caps that cannot be mistaken for any other.

For instance, this fall weather has brought the tall, flaky-peaked, Shaggy Inky Caps (Coprinus comatus) from the earth. One beauty of this “fungus among us” is its unique ability to appear overnight. The vast majority of a mushroom’s hyphal mass lies underground and silently decomposes organic material. Then, when environmental conditions are perfect, the cap can appear overnight. The Shaggy Mane inky cap can also disappear in a night. This species has the unique adaptation to deliquesce, or as some would say, self-digest — turning themselves into an inky mess with their own enzymes. By totally breaking down, they improves the travel potential of their single round of spores. (Read more in “The Dish on Deliquescence in Coprinus Species,” a delightful read.) If you are new to mushroom hunting, this distinctive mushroom is a great place to start. 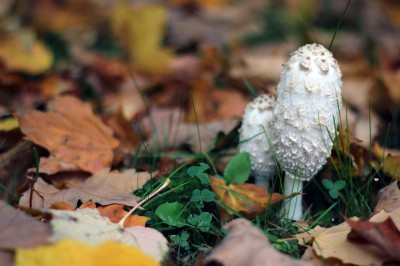 The mushroom itself is easily identifiable by its lofty cap, fleshy white flakes, and annulus, or ring, around the stipe, or stem. (This feature is not captured in these photos.) Not only is it easy to identify, it is also quite tasty. Preparation can be as simple as flouring and panfrying in butter for a tasty side dish. However, the mushroom will start to turn “inky” soon after being picked, so don’t wait long before preparation. It’s a good idea to hunt for these with someone who has experience with edible mushrooms, as there are many mushrooms that are NOT edible. 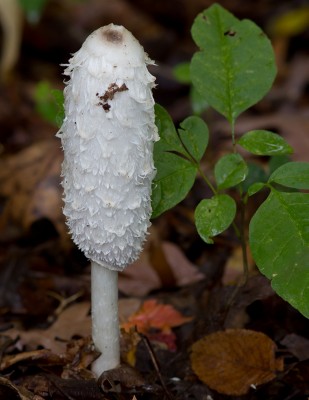