The Hellbenders of Pennsylvania

Hellbenders — What are they?

When someone told me, in college, that there were salamanders in Pennsylvania capable of being a foot and a half long, I thought I would be calling a bluff. But those salamanders are real and incredible and they’re called eastern hellbenders (Cryptobranchus alleganiensis). Hellbenders are the largest amphibian in North American. They are well-known for being very slimy and difficult to grasp. In the wild, they can live to be 30 years old.

These salamanders are often confused with mudpuppies. The hellbender, unlike the mudpuppy, has deeply wrinkled skin, especially on its sides between the legs. Another key difference is that adult hellbenders have a single gill slit on the each side of the head, while mudpuppies have external gills. Since that first “bluff”, I’ve made it a personal goal of mine to find a hellbender. But it’s not an easy task! First of all, you have to find the right habitat. 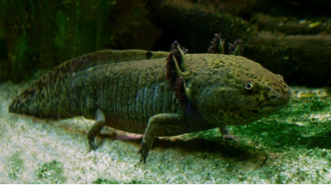 What do they need?

What do hellbenders need to survive and thrive? Research seems to point to many large, flat stones, well oxygenated and fast waters (usually including riffles), cold temperatures, an abundance of prey such as crayfish, and low pollution and siltation. Hellbenders use large rocks to protect themselves and their eggs, so they are a necessity in their habitats. Siltation, suspended sediments in the water or accumulation of fine sediments on the bottom of waterways, is very detrimental to hellbenders. It can clog the spaces under large rocks that hellbenders live in, and threaten the development of their eggs and larvae.

Why are we searching for them?

Hellbenders are specialists, making them particularly susceptible to ecological disturbances. Since they are amphibians who live their entire lives in the water, they are especially influenced by anything that affects water quality. This includes changes in pH caused by acid rain and abandoned mine drainage, siltation from runoff or erosion, increased temperature from loss of riparian zones, new dams, and other disturbances. Historically, fishermen killed hellbenders, especially in trout streams, because they (wrongly) believed that hellbenders ate large quantities of fish (crayfish are their main diet). In fact, in the early 1920s and 1930s, a bounty of twenty-five cents per hellbender was established in some areas. In the last few decades, hellbenders have also been illegally collected, often to sell. These historic and current factors have led to drastic hellbender population declines widespread throughout their range. Finding them therefore gives us many indications about the health of a stream and can also contribute to efforts to collect population and distribution data.

Where can we find them?

Tomorrow, following a lead, Shaver’s Creek staff will be heading to Clinton county to look for hellbenders. We won’t say exactly where we are headed within the county, because if we find hellbenders, we’d like to protect their location from poachers.

What will we look for?

Research indicates that hellbenders typically live alone under rocks, only gathering together to mate. They also seem to have an individual home range of about 100 square meters, which they tend to defend. That means that we’ll be searching for a long stretch of river that has many large rocks.

Since we are only working with snorkel gear, we will not be overturning the large rocks hellbenders hide under. This is a less habitat-disturbing approach, but also decreases our chances of seeing them. We may also look for hellbender larvae, though they are traditionally harder to find. 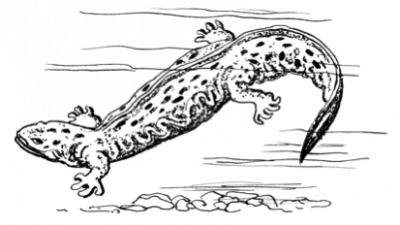 What can I do?

Despite warnings from Pennsylvanian scientists, citizen scientists, naturalists, and landowners that hellbender populations are noticeably declining, the hellbender currently is not listed as an endagered or threatened species in Pennsylvania. However, they have been designated a species of special concern and are also recognized as vulnerable. The Fish and Boat Commission’s regulation for hellbenders does afford them some protections. In Pennsylvania, hellbenders have no open season and are not allowed to be possessed. These regulations are especially useful in protecting adult hellbenders, but many have noted that larvae populations are much lower than expected or absent in hellbender streams. Many believe this can only be changed by protecting the surrounding land and waterways hellbenders need. Several groups are working to educate others on the need for hellbender protection and conservation, including the Clean Water Institute (CWI) and the Western Pennsylvania Conservancy.

You can help hellbenders by not disturbing large rocks in waterways, volunteering in citizen efforts to decrease erosion and sedimentation, submitting surveys (if you find a hellbender!) to PAHerps.com, and educating others about this amazing amphibian. Please keep an eye out for another blog about our trip to see if we found any hellbenders! We’re hoping to get some video footage via a GoPro camera!