A Recap of the Fall 2016 Monarch Migration in Central Pennsylvania.

Every spring and fall an amazing occurrence in the animal kingdom takes place: migration. Bird enthusiasts from all around the world flock together to feast their eyes upon the thousands of bird species that travel south to warmer climates in the fall, and sojourn back north in the spring to breed. However, each year there is another organism, weighing only one gram, that makes a journey over 2,000 miles to the mountains of Central Mexico. This insect is often seen flaunting its bright orange and black wings as it flutters among a variety of blooming, nectar-filled flowers. From tiny caterpillar to winged beauty, the monarch butterfly (Danaus plexippus) brings delight to all ages and ignites a passion in those that seek to conserve it. 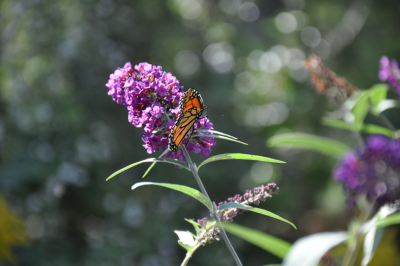 In mid-August, fourth generation monarchs start to conserve fat and energy for their long trip south. Any monarchs east of the Rocky Mountains will fly through several eastern states, funnel through Texas, then spread across Mexico’s Sierra Madre Mountains. How they know where to go is still a mystery to scientists. The monarchs utilize northwest winds and thermal updrafts, sometimes traveling up to 80 miles a day. They typically arrive in Mexico in early November and settle in the canopies of oyamel fir forests at altitudes of 10,000 feet. Colonies as large as 30–40 million individuals will remain in these forests through March. At the end of this time, the monarchs mate, and the first spring generation starts to head north. It takes three generations for the butterflies to reach their final northern destination, at which point the cycle is complete.

Over the past several decades monarchs have been in a state of decline, mainly due to habitat loss in both the United States (along the migration path) and in the forests of Mexico (at wintering sites). Besides habitat loss, increased development and pesticide use in the States is negatively impacting milkweed, a plant that is essential to the monarch’s survival. During the spring, as the monarchs travel north, the females need to have access to milkweed in order to lay their eggs — milkweed is the only plant that monarch caterpillars eat. In Mexico, large stands of oyamel fir are being cut down to support the livelihood of native people. As a consequence, monarchs are losing the safety of the canopy at these sites. This decline in population is of concern not only to scientists, but also to everyday citizens that simply enjoy the presence of monarchs both in the United States and Mexico.

Several organizations are utilizing citizen science to monitor monarch populations more closely. These efforts include Monarch Watch, a nonprofit education, conservation, and research organization based out of the University of Kansas, and the Monarch Monitoring Project, a long-term study on monarch migration based out of Cape May, New Jersey. This fall, Jon Kauffman (assistant director of the raptor center at Shaver’s Creek) and I tagged 100 monarch butterflies at sites surrounding Shaver’s Creek Environmental Center, using tags from Monarch Watch. These tags allow individuals to be tracked, which gives insight into monarch orientation and navigation, as well as population numbers at overwintering sites. Among the 100 we tagged, 48 were male, 51 were female, and one’s sex was unknown. 96 were wild and 4 were reared in captivity, then released.

Typically, the dates for tagging monarchs are September 1 to October 31, but this year the Monarch Monitoring Project team tagged 155 butterflies on November 2. This late surge was also seen via monarch observations at three hawkwatch sites in Central Pennsylvania. Earlier this month, five monarchs were spotted between Stone and Jacks Mountain and Waggoner’s Gap. In November 2015, 13 monarchs were observed between Jacks Mountain and Waggoner’s Gap.

The totals of monarchs seen on hawkwatches this fall (2016) from September 1 through October 31 were:

By comparing the 2015 and 2016 counts, initial observations show that monarch numbers were low this year compared to last. For the 2015–2016 season, Monarch Watch recorded a preliminary recovery of 1,082 tagged monarchs at winter sites in Mexico. The overwintering population of 2015–2016 was large, taking up 4.01 hectares of forest. (Four hectares is the threshold for determining whether population numbers are healthy.) The seasons previous to 2015–2016 showed the lowest populations ever recorded due to a combination of habitat loss and intolerable weather. Although this year’s observed numbers were lower here in central Pennsylvania, we will need to wait until March 2017 for the recovery number of the 2016–2017 season in order to gain a better understanding of population dynamics. It will be interesting to see if the numbers that we observed along several migration routes will correspond to the recovery numbers in overwintering sites. 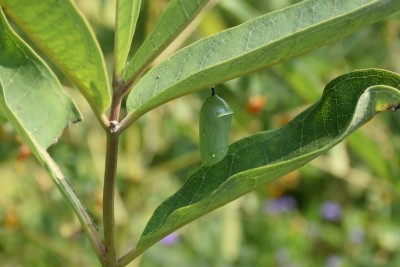 I can, without a doubt, say that my love and appreciation for monarchs has grown this season. Wendell Berry, an American writer, poet, environmental activist, and farmer, said in his essay The Long-Legged House, “Hurry is beside the point, useless, an obstruction. The thing is to be attentively present. To sit and wait is as important as to move.” I encourage anyone that is reading this to sit and wait next spring for black and orange wings on the horizon, welcoming them with gardens full of milkweed and nectar-bearing flowers. And perhaps you too will be mesmerized by the beating of fragile wings lifting light bodies into the vast blue sky. If you see a tagged monarch, please email or call the address or number on the tag, and make sure to include the date, time, location, tag code (3-letter, 3-number), and your own contact information. To learn more about monarchs and how you can be involved in citizen science projects visit Monarch Watch and the Monarch Monitoring Project.