Site 1 of the Long-term Ecological Reflections Project (LTERP) at Shaver’s Creek is referred to as the “Twin Bridges” area — within the small grove of Eastern hemlocks beside the two wooden bridges over our namesake creek.

For the next 100 years, writers, artists, musicians, children, students, and community members are invited to reflect on this and the seven other locations designated as part of the LTERP. This collection of reflections will provide an interesting and unique record over the next century so that future generations can better learn the story of this place.

Enjoy these excerpts from several past contributors to the project, and follow the links to read their full Creek Journals:

Bumble bees roam each side of the bridges and fill themselves on the flowers, unconcerned by my grabbing the closest flower and pulling it near me. If you stand on the eastern bridge you’ll hear the comforting sound of a creek. You’ll also see a hefty chain tethering the eastern bridge to a hemlock upstream. I’m guessing during a past storm the western bridge lost its twin for a while. It’s a lush transition from hemlock, pine and poplar forests and the matted needle-leaf trail to the bridge over Shaver’s Creek with chest-high flowers and shrubs topped with tiger swallowtails and fritillaries of some sort.

The Environmental Center has day camps throughout much of the summer, so kids around 5-12-years-old move in packs led by high school or college-age interns. Up over a rise or down the trail I’d hear their giggles and footsteps or other times the group will break into a loud, silly song flushing out even the bluejays. Once, at Sunset Point, a group walked into the pavilion and the leader yelled, “Camouflage” and the children scattered and hid behind trees and rocks trying to blend into the forest. On the grassy lawn adjacent to the Center, another bunch played “Mosquito Tag” running around with fanoodles stuck to their noses jabbing their then paralyzed host. An intern turned to me and said, “It’s Adaptation Day!” Ah, I grinned.

Standing on the eastern bridge, I see a group of campers walking toward me from the other bridge. They take note and are appropriately wary of me, an adult they don’t know. For a moment, it seemed we were so far apart, this generation of kids and me, almost old enough to be their grandparent, on either side of these twin bridges.

When I was their age in the mid 70s, my summers were spent on my own. My mom would make me a lunch (usually Fritos and a bologna sandwich) and tell me not to be inside the house until they returned from work. We lived near a reservoir dam and below it was 1800 acres of forested, flood plain bliss. I would roam the woods making forts of rocks and limbs or fish for sand bass in the shallows of the Elm Fork tossing a silver slab lure and reeling it in slowly against the current. 5 o’clock always came too early, but I knew I had to be back by dinnertime. I’d come home with fossils, rocks, or odd shaped sticks that caught my fancy. Sometimes, I’d also bring home a poison ivy rash and chigger bites all along my legs; now and then my mom would pluck a gray, bulbous, engorged tick off me. Those summers, though, were sheer joy. Some forty years later, I’ve never lost that feeling. It is the single most important reason I’m here as part of the LTERP and why I write; writing or a walk in the woods lets me become that playful and curious boy again.

Through the center of this vest-pocket meadow rises a line of dead hemlocks. From the sagging, skeletal branch of one, a flycatcher launches itself to snag a bug, both bird and prey leaving an afterimage of blurred sunlight on my retina as they intersect and merge. The bird perches, green-gray, anonymous. An alder flycatcher, or its look-alike cousin, the willow? No way to say which species, since the bird isn’t singing, no fitz-bew or ree-be-o to declare its allegiance to one branch of the family tree or the other. Those dead hemlocks are the key to unlocking the recent history of this place. Hemlocks love little streams like this one, the cool, acidic soil that they further steep with their tannic needles, while darkening its banks with diffuse, deep-sea-green shadows through which only a few, confused sunbeams penetrate.

The longer I sit here, the more there is to see — I could probably write all day just trying to record what’s going on around me. In short, I’m busy reading the landscape — and feeling I could never write it all down. But what’s the point of trying to write it all down? Maybe the point is to remember and commemorate the beauty of a place like this before it’s all gone. Hence the elegiac strain in so much nature writing. Quick — preserve the place in words before the Wal-Mart gets put up here.

Walking across Twin Bridges in boots makes resonating clunking sounds that remind me of the town playground when I was a kid. I’m sure that these bridges have served as a playground for many children, over the years, who came to learn about the natural world. I can imagine hyper elementary school children with nets running back and forth over the bridges, laughing and trying to catch aquatic insects. Thick hemlocks block the view of a nearby road, providing a buffer that, like childhood, offers some protection from the harsh realities of the world.

We’ve been taken captive
by the world, named by it, taught

to eat from its table.  The whetted blade
slides through the flesh, thin veil

that parts to reveal what we think
is the soul.  We set fires and burn

the earth because berry canes
won’t come back without dirt

as dark as the color of its fruit.
Before the oldest trees were felled

we traveled the watercourse.
Now in the open fields we track

coyote, hoping to save the sweet
lambs we tend.  Sadly, as night

stumbles down, all we find
are clumps of wool caught

in teasel’s fine comb.
More than two centuries ago

Linnaeus began to arrange all
the names we’ve given back

to the world.  This is how we know
black walnut hulls, when crushed,

smell like lemon, or when we walk
through sweet fern grouse will burst

into flight, dragging the plant’s sharp
scent into the air.  Near the stream

a tulip poplar blows down, leaves
turning the yellow of mustard

and ragwort.  Despite the order
we’ve cultivated, the charts

we’ve set to memory, we’re likely
to discover our way is one

of unknowing.  When we die
may we be a pleasing word

placed in the mouth
of the world.

For more information on the Long-term Ecological Reflections Project, or to learn how to contribute material, please email Doug Wentzel at djw105@psu.edu. 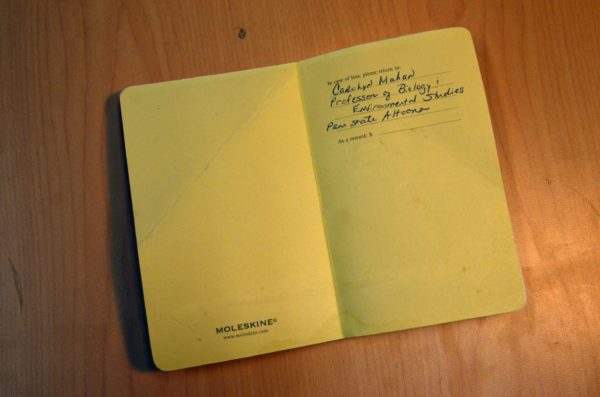 Visit our Creek Journals on medium.com to read the complete reflections from our LTERP contributors.

Read More Reflections from our Contributors